James Anderson's fifer knocks India out for 107 in Lord's Test 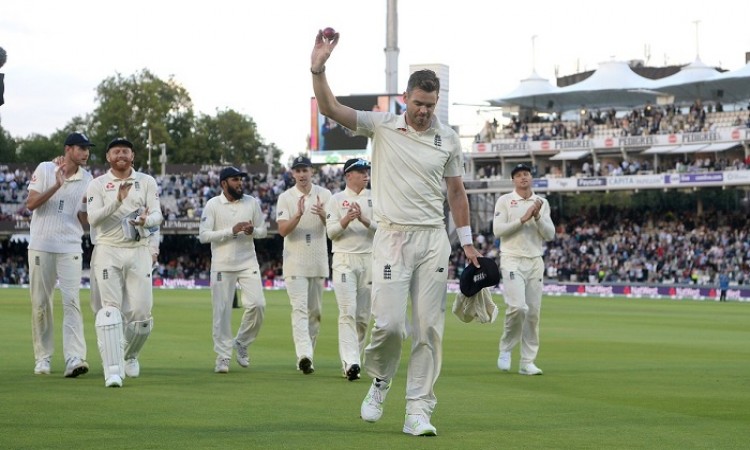 London, Aug 11 (CRICKETNMORE) Veteran quick James Anderson starred with the ball taking five wickets to help England bowl India out for a paltry 107 at stumps on a rain-truncated second day of the second cricket Test at Lord's here on Friday.

Off-spinner Ravichandran Ashwin (29) top-scored for the visitors even as the English pacers used the overcast conditions well, with Anderson emerging the wrecker-in-chief to pick 5/20.

Put in to bat after incessant rain completely washed out the opening day, India failed to recover from the early jolts of openers Murali Vijay (0) and Lokesh Rahul (8) before the showers disrupted the proceedings in the morning session.

Coming back to the side, No.3 Cheteshwar Pujara survived 25 deliveries for 1 run before a mix-up with skipper Virat Kohli (23), cut short the Saurashtra Test specialist's stay even as rain stopped play once again.

The teams then returned to the field after losing more than three hours, and with India struggling at 15/3, Kohli was joined by his deputy Ajinkya Rahane (18).

Both Kohli and Rahane survived the early jitters from the English pacers to start the rebuilding work with a 34-run fourth wicket stand before the in-form India captain fell to Chris Woakes.

Kohli, who was looking all at sea against Woakes, finally fell to the right-armer in his third over, with Jos Buttler making no mistake this time at second slip.

Off-spinner Ravichandran Ashwin (29) then joined Rahane in the middle to add 22 runs for the seventh wicket before the old warhorse James Anderson came back to add more misery to the visitors with the dismissal of the Mumbai batsman.

Rahane, who did all the hard work to survive 44 deliveries, nicked Anderson's straight delivery to first slip Alastair Cook.

Anderson immediately jolted India by trapping chinaman Kuldeep Yadav (0) plumb in front with a brilliant in-swinger, which the television replays also ruled in favour of the hosts.

Anderson's new ball partner Stuart Broad then joined the party with the wicket of Ashwin, who looked good during his 38-ball stay, that also included four brave hits to the fence.

Towards the end, tailender Mohammed Shami struck a few lusty blows to guide India to the three-figure mark before fellow quick Ishant Sharma (0) was trapped by Anderson.