With four consecutive victories, Kings XI Punjab (KXIP) have stunned everyone and the KL Rahul-led lineup will aim to keep the juggernaut rolling when they face Kolkata Knight Riders (KKR) in the 46th fixture of the Indian Premier League (IPL) here on Monday. 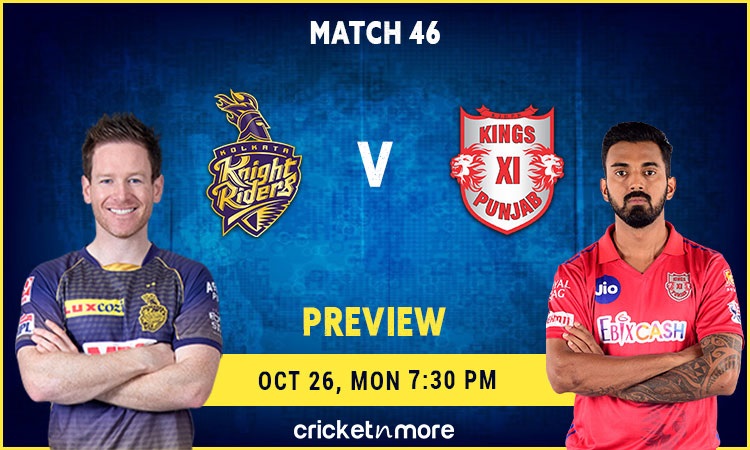 The last time the two sides squared off, KKR beat KXIP by two runs. However, a lot has changed since then. While the Eoin Morgan-led team has been inconsistent, Punjab have managed to win matches regardless of how far behind they are.

KXIP will be, undoubtedly, riding high on confidence after their narrow but morale boosting win against Sunrisers Hyderabad (SRH). Despite putting a paltry 126/7 on board, KXIP managed a win, thanks to their bowlers, who stepped up at the right time.

The KXIP top-order, comprising Rahul and Mayank Agarwal, has been accomplishing on a regular basis and the coming back of Chris Gayle has further strengthened their batting. Nicholas Pooran has been in good form of late but Glenn Maxwell's inconsistency will again be a concern.

Their bowling mostly revolves around experienced Mohammad Shami and Ravi Bishnoi. However, Arshdeep Singh and Chris Jordan came into the party against SRH, turning the screws spectacularly in the final two overs to lead them to victory.

On the other hand, KKR staged a stunning comeback, following up an eight-wicket hammering by Royal Challengers Bangalore (RCB) with a 59-run win over the high flying Delhi Capitals (DC).

Their top-order featuring Shubman Gill and Nitish Rana are in form. Sunil Narine, who missed few games recently, was quite impressive in the last game playing a crucial 64-run knock down the order.

Pacer Pat Cummins, Prasidh Krishna and Kamlesh Nagarkoti were economical against DC but it was spinner Varun Chakravarthy (5/20), who hogged all the limelight with an exceptional performance with the ball.