With three back-to-back wins, a confident SunRisers Hyderabad (SRH) will be looking to march ahead in the Indian Premier league (IPL) when they take on Royal Challengers Bangalore (RCB) in the Eliminator at the Sheikh Zayed Stadium here on Friday. 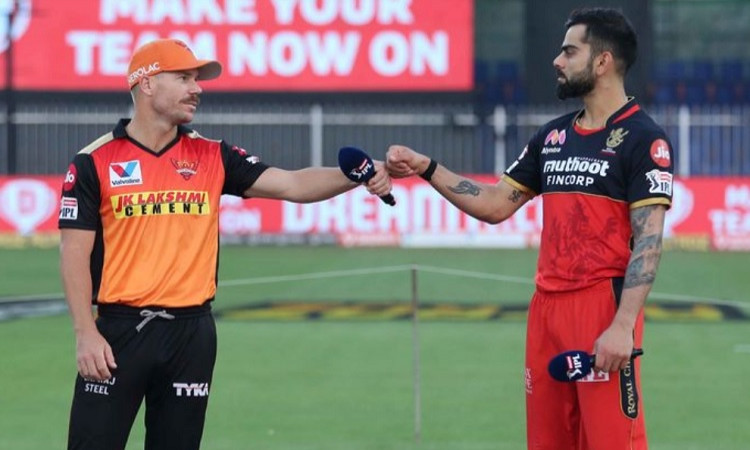 Bangalore have suffered four consecutive defeats and the Virat Kohli-led side last tasted a victory against Kolkata Knight Riders nearly two weeks ago.

However, RCB still managed to enter the playoffs, thanks to their first-half performances and the different permutations and combinations that went their way.

On Friday, Kohli and Co. will, however, face a must-win situation as another defeat will end their campaign. Young opener Josh Philippe (78 in 5 matches) is yet to score big after getting starts in the last few matches. RCB may also decide to bring back Aaron Finch at the top order to partner Devdutt Padikkal (472 in 14 matches) who has been brilliant so far at the top of the order.

Kohli (460 in 14 matches), whose strike-rate has been under scanner in recent times, will have the responsibility to build the innings with AB de Villiers (398 in 14 matches) in the middle-order.

Chris Morris and Shivam Dube will need to escalate the run-rate with fireworks down the order. Pacer Navdeep Saini (6 wickets in 12 matches), who missed the last match due to a split webbing, will likely return in the big game.

Saini along with Mohammed Siraj (9 wickets in 8 matches), Isuru Udana (8 wickets in 10 matches) and all-rounder Morris (11 wickets in 9 matches) will have the responsibility to jolt the in-form SRH top-order.

Yuzvendra Chahal (20 from 14) will again be RCB's go-to man and would hope some quality support from Washington Sundar.

On the other hand, SRH would be high on confidence after their magnificent 10-wicket over Mumbai Indians in their last game.

The Warner-led side, however, should be aware of the fact that MI were without the services of Jasprit Bumrah and Trent Boult, who were rested in the game.

The SRH top-order, comprising Warner (529 in 14 matches) and Wriddhiman Saha (214 in 4 matches), has been the major reason behind their success.

Manish Pandey (380 in 14 matches) and Kane Williamson (200 in 10 matches) will have the onus to strengthen the innings in the middle-order while Priyam Garg and all-rounder Jason Holder (31 runs, 10 wickets) should build on the momentum.

Of the total 17 matches so far between the two teams in the IPL, SRH have managed nine wins while RCB have seven with a game being abandoned.