Royal Challengers Bangalore(RCB) started their IPL 2020 campaign with a win against Sunrisers Hyderabad(SRH). Both the teams will once again meet this season in an all-important game.

Also Read: The Team Has Gone Strength To Strength In The Last 5 Matches: Kumble

Royal Challengers Bangalore batsmen haven't been able to score quick runs when needed. Josh Philippe was sent as a new opener alongside in form Devdutt Padikkal. Virat Kohli and AB de Villiers will play an important role if the RCB team wants to score big.

The bowlers have done a good job to put pressure on the opposition. Yuzvendra Chahal is the key bowler for them in any phase of the game. Navdeep Saini's absence was seen in the last game against MI, especially in the death overs. Isuru Udana might come back into the playing XI in place of Dale Steyn.

Sunrisers Hyderabad too had a new opening pair in the last game against DC. Wridhiman Saha and David Warner took the game away from the opposition with some powerful hitting. The new-look batting of SRH looks well balanced and they might play the same XI in this match as well.

Rashid Khan once again was the difference between the two teams. His economical spell and the ability to pick key wickets is the reason why SRH is still in the hunt for the playoffs.

Royal Challengers Bangalore are in desperate need to win this game otherwise they might miss the playoffs bus this season. Sunrisers Hyderabad will be looking to cling on to their outside chance of crashing into the playoffs.

RCB VS SRH Head to Head:

Royal Challengers Bangalore - Navdeep Saini's availability is still unclear and he might miss this match as well.

The temperature will be around 29 degrees Celcius in the evening.

The Sharjah pitch has something to offer for everybody. The new ball has swung and seamed in the previous games and the dew has helped the chasing team in the batting. The team winning the toss might choose to bowl first here. 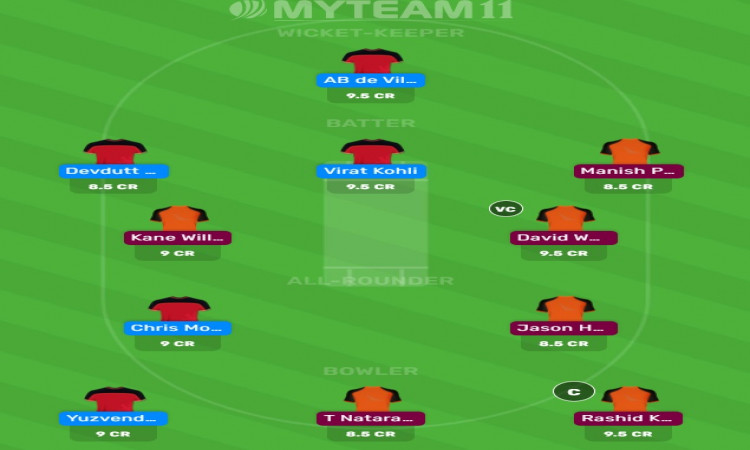