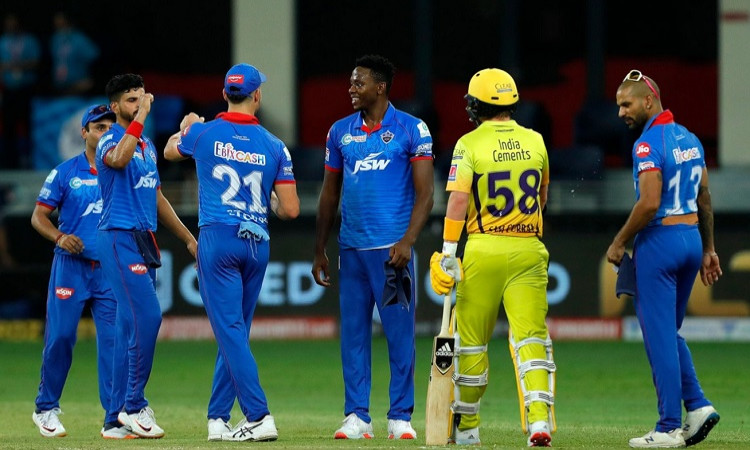 Chasing a target of 176, CSK hardly ever looked capable of reaching the score and were restricted to 131/7 at the end of 20 overs. This is the three-time champions' second consecutive defeat this season.

This is the first time since 2010 that DC have started an IPL season with two consecutive victories. They are on top of the table now with four points.

DC's Axar Patel continued his successful run against Shane Watson, dismissing the veteran Australian in the fifth over while he was on 14 off 16 balls. Watson's opening partner Murali Vijay (10) also struggled to get runs on board and succumbed to Nortje in the next over.

CSK captain MS Dhoni again decided to stay in the lower middle order and it was 23-year-old Ruturaj Gaikwad who came in at no. 4. Gaikwad's innings was short-lived as he was run out for 5.

Faf du Plessis and Kedar Jadhav managed to temporarily stem the flow of wickets and put up 54 runs for the fourth wicket. But the run rate was never what it needed to be and by the time Jadhav fell, CSK were 98/4 in the 16th over. Du Plessis, Dhoni, Ravindra Jadeja and Sam Curran's efforts in the end proved too little too late.

Earlier, DC openers Shaw and Shikhar Dhawan started patiently before dictating the flow of the game throughout the first half of the innings. After the openers' dismissals, Rishabh Pant (37 not out) and captain Shreyas Iyer (26) added 58 for the third wicket to help DC to 175/3.