The ongoing Indian Premier League (IPL) season has almost reached its half-way mark and the KL Rahul-led Kings XI Punjab (KXIP) are yet to find winnings ways. The bottom-of the-table team will now be up against Kolkata Knight Riders (KKR) on Saturday in what could be called a must-win game if they want to keep their play-offs hopes alive.

With just a single win from six games, KXIP seem to be over-reliant on skipper Rahul, opener Mayank Agarwal and pace bowler Mohammad Shami. Barring the trio, the rest of the players have failed to click. 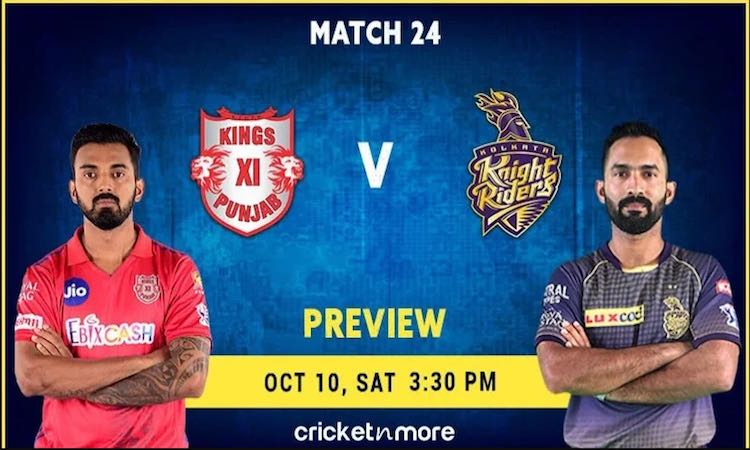 Nicholas Pooran showed signs of the destruction he could cause in the middle-order in the game against SunRisers Hyderabad (SRH) but the Caribbean player needs to be consistent. Other hard-hitters like Glenn Maxwell have been completely silent so far.

In the bowling department, Shami has led from the front with nine wickets from six games. Arshdeep Singh and Sheldon Cottrell need to be consistent. Spin duo Ravi Bishnoi and Mujeeb Ur Rahman will be key.

The Dinesh Karthik-led KKR have six points from five games and will aim to consolidate their position in the top four of the points-table.

The KKR think-tank tinkered with the opening slot in their last game against Chennai Super Kings, promoting Rahul Tripathi up the order. The ploy worked. Tripathi played a blistering 51-ball 81-run knock but once again, the others failed to support him.

The KKR boast of some great cricketing talent with the likes of Eoin Morgan, Andre Russell and Sunil Narine in their ranks but they have struggled in the middle-order and that needs to be fixed as soon as possible.

They were able to defend a moderate 168-run target against CSK, thanks to a collective show by their bowlers.

Of the 25 games the two sides have played against each other, KKR have managed 17 wins while KXIP merely eight.