The Kings XI Punjab (KXIP) juggernaut continued to roll on Monday as they crushed Kolkata Knight Riders (KKR) by eight wickets in an Indian Premier League (IPL) match and brightened their chances of securing a playoff berth. 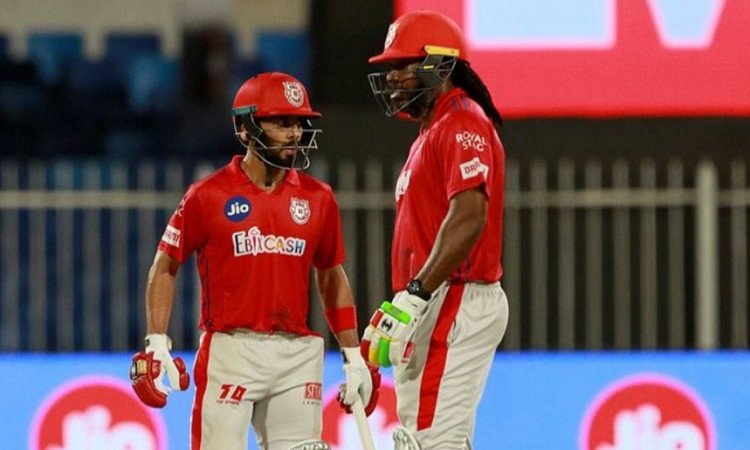 It was Punjab's fifth win on the trot while KKR, who slumped to the fifth position, suffered their sixth defeat of the season. Both teams have 12 points each, though Punjab climbed to the fourth spot, thanks to their better net-run rate (-0.049). KKR have a net run rate of -0.479.

The outcome of the game means the mid-table traffic further intensifies with Rajasthan Royals (RR) - they have 10 points from 12 games -- and SunRisers Hyderabad (SRH) -- eight points from 11 matches -- still holding a slender chance of making it to the playoffs.

Mumbai Indians, Delhi Capitals, and Royal Challengers Bangalore are the top three teams with 14 points each. The top four teams qualify for the playoffs.

On Monday, KXIP, opting to bowl on winning the toss, restricted KKR to a modest total of 149/9 wickets in 20 overs. And then KL Rahul's team rode opener Mandeep Singh's 66 not out and Chris Gayle's 51 to hunt down the target with seven deliveries and eight wickets to spare, finishing at 150 for two wickets in 18.5 overs.

In-form Rahul and Mandeep started on a cautious note, adding 36 runs in the first six overs. Just when Punjab were approaching the 50-run mark, mystery spinner Varun Chakravarthy (1/34) drew the first blood, trapping Rahul (28) off the last ball of the eighth over.

Mandeep was then joined by Gayle. The pair denied the opposition bowlers any more breakthroughs till the 19th over. Their sensible work in the middle saw KXIP cross the 100-run mark in 13.4 overs as KKR struggled for wickets.

Just when the duo was about to wrap up the proceedings, three runs away from the victory, Lockie Ferguson (1/32) struck in the first ball of the 19th over to pack up Gayle, who had just completed his fifty. Gayle's knock was laced with two boundaries and five massive sixes.

Incoming batter Nicholas Pooran (2 not out) and Mandeep completed the formalities within the next four deliveries as KXIP romped home by eight wickets.

Morgan and Gill, who regained his touch after struggling in the recent few games, were involved in a crucial 81-run partnership for the fourth wicket after the other three top order KKR batters had failed to contribute.

Apart from the duo, Lockie Ferguson played a quick 13-ball unbeaten 24-run knock, helping his side post a moderate total.