While T20 is said to be tailor-made for batsmen, bowlers and fielders do have important roles to play. Like previous seasons, Indian Premier League (IPL) 2020 has also witnessed some of the finest acrobatic efforts on the field in the 40 matches that have been played so far. 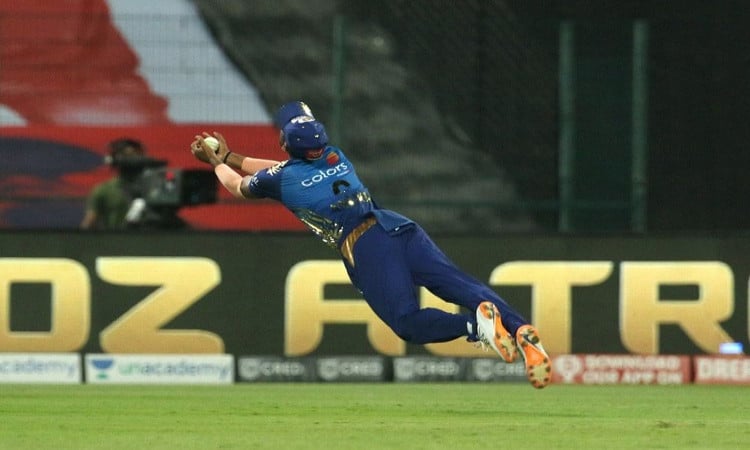 Let's take a look at the top IPL fielding performances that will stand out for a long time:

Pooran's brilliance at the boundary against RR

In the eighth over of Rajasthan Royals' chase of 224, Sanju Samson played a pull shot off Murugan Ashwin and it was then that Pooran, standing at deep mid-wicket, dived full length over the rope to catch the ball. The West Indian caught the ball while hanging in the air and realizing that he wouldn't be able to come inside the boundary line, he threw the ball -- all while being in the air -- back inside the boundary line to save his team vital six runs.

During match number seven of IPL 2020, Chennai Super Kings skipper MS Dhoni showed why he is still among the fittest of cricketers when he dived full-length to take a superb catch to dismiss his Delhi Capitals counterpart.

On the last ball of the 19th over bowled by Sam Curran, Iyer attempted for a big shot. He, however, failed to do so and just managed to edge the ball which the 39-year-old Dhoni caught as he jumped towards his right side and pouched the catch at the first slip.

On the last ball of the 15th over bowled by Sandeep Sharma, Kishan flat-batted the lofted drive to the right of long-on hoping that he will get a boundary. However, Pandey rushed across from long-on, threw himself at the ball and completed the two-handed catch to pull off an absolute ripper.

In the 12th match between Kolkata Knight Riders and Rajasthan Royals, Kamlesh Nagarkoti pulled off a sensational running catch to get rid of Jofra Archer.

On the fourth ball of the 15th over bowled by Varun Chakravarthy, Archer tried to hit a good length ball straight over the bowler's head for six but mistimed it. It went high up in the air and Nagarkoti, came all the way running from his position at long-on to complete the catch in front of long-off. The pacer was so much committed to taking the catch that he made a right jump and was able to latch on to the ball successfully.

Rajasthan once again became witness to a splendid fielding effort when Mumbai Indian's Anukul Roy took a blinder to dismiss Mahipal Lomror in the 20th match of the ongoing season.

In the ninth over during RR's chase of 194, Lomror - in his attempt to up the ante against Rahul Chahar -- hit the ball high in the air on the off-side after which Roy, who had come as a substitute for Suryakumar Yadav -- ran back from short cover to mid-off and timed his dive to perfection to take a splendid catch.

During the 37th IPL 13 match between Chennai Super Kings and Rajasthan Royals, Dhoni once again came out with proof of his agility as he took a diving catch, low down on the leg side to see the back of Sanju Samson.

On the third ball of the fifth over during RR's chase of 126, Deepak Chahar bowled a delivery down the leg side. Samson flicked the ball but it didn't go far away from Dhoni who dived to his left and took the catch as the ball stuck in the webbing between the thumb and forefinger.