All-rounder Jason Holder on Saturday pulled a stumbling SunRisers Hyderabad (SRH) over the line against Royal Challengers Bangalore (RCB) in the Indian Premier League (IPL), and took them closer to the playoffs with the five-wicket verdict. 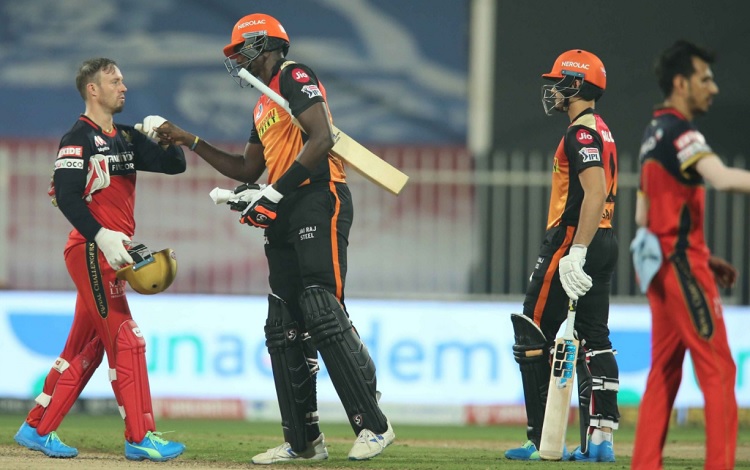 Mumbai Indians are at the top of the table with 18 points while RCB and Delhi Capitals are placed second and third with 14 points each. The top four teams qualify for the playoffs.

Chasing RCB's 120 for seven wickets in 20 overs, Holder smashed 26 off 10 balls to take his team to a five-wicket win with just under six overs to spare at the Sharjah Cricket Stadium. SRH finished at 121 for five wickets in14.1 overs.

In the crucial contest on Saturday, SRH opted to field on winning the toss and rode some impressive bowling effort to restrict a star-studded RCB to a moderate total. In return, SRH suffered few hiccups but somehow managed to find their way o victory.

Wriddhiman Saha (39) and Manish Pandey (26) then repaired the early damage as their side raced away to the 50-run mark in 5.2 overs.

Yuzvendra Chahal (2/19) applied brakes on the developing partnership when he accounted for the wicket of Pandey in the seventh over.

SRH then lost Saha and Kane Williamson (8) within another 27 runs with their scorecard reading 87/4 in 12.1 overs.

Holder (26 not out) and Abhishek Sharma (8) then stitched a 27-run stand for the fifth wicket. But just when SRH were seven runs away from crossing the line, Navdeep Saini stuck to send back Sharma in the 14th over.

Holder smacked Chahal for a maximum over long-on fence to steer his side home with 35 balls to spare.

Earlier, some quality bowling saw RCB being restricted to 120/7 wickets in the allotted 20 overs as Sandeep Sharma (2/20) and Jason Holder (2/27) starred for SRH. Apart from the duo, Shahbaz Nadeem, Rashid Khan and T Natarajan bagged a wicket apiece.

Put into bat, RCB batters failed to convert the start. It was the collective effort by AB de Villiers (24), Josh Philippe (32), Washington Sundar (21) and Gurkeerat Singh (15 not out) as RCB somehow limped to a moderate total.