Jaipur, April 11 (CRICKETNMORE):  At an evening that represented more than an exciting game of cricket, Rajasthan Royals hosted Chennai Super Kings at the Sawai Man Singh Stadium to celebrate the empowered women and their fights against social evils in the state. 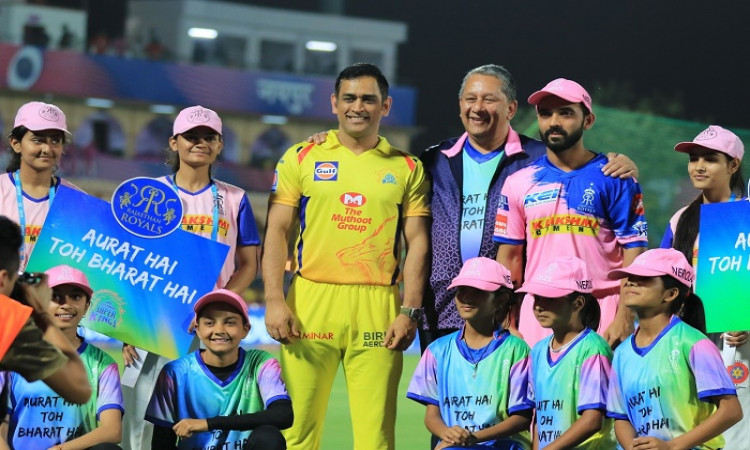 Continuing from last year's ‘Cancer Out' campaign that created awareness about early screening of cancers, the Royals have expanded the movement to address more social issues. It included launch of the Royal Sparks platform, an initiative that is aimed at scouting and training budding female cricketers in Rajasthan.

Also Read: Andre Russell kills it with his fashion sense too: Dinesh Karthik

‘Aurat hain, toh Bharat hain!" was the theme for the evening, which witnessed the coming together of some of the meritorious women from across Rajasthan who have made their own mark in the society and had inspiring stories to share.

Prior to the start of play, both captains, Ajinkya Rahane and Mahendra Singh Dhoni, exchanged plaques encapsulating the message of empowered women. It was followed by the felicitation of the Royal Sparks girls by the two skippers. Undoubtedly, the young women cricketers were the stars of the evening.

The memorable evening also hosted many other inspirational women from the state as part of Rajasthan Royals' initiative of recognising and supporting women as champions and inspiring them to empower society to create a better and sustainable Rajasthan.

Besides the girls from Royal Sparks, women from LEDS-Labour Education Development Society under the British Asian Trust were also present. LEDS, which addresses social issues like gender inequality and women empowerment, is one of the driving forces behind the growth and uplift of Dalit women.

The organisation helps women by training them to make child labour-free goods, spread awareness and create a perspective among masses against the evil practice of child labour. The training helps these women become economically independent and champions of this social cause. Spreading awareness is of utmost importance for organisations, like the Freedom Funds which strives to rescue the children abducted and trafficked into the state.

Also, present were women from NA-AV, an Organic Certified Clothing & Lifestyle brand. It is committed to empower rural artisans, resurrect the fading local arts and evolve the fashion culture in Rajasthan. Along with them were seated the cancer survivors, courtesy proud partners Tata Trusts.