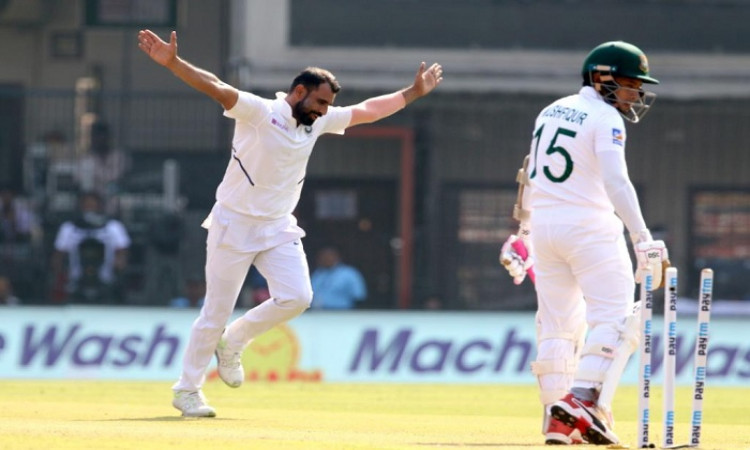 Indore, Nov 14: Mohammed Shami grabbed two wickets off the last two balls before tea to dash any Bangladesh hopes of a revival as they were left reeling at 140/7 on Day 1 of the first Test here on Thursday. India skipper Virat Kohli brought back Shami for a short spell before the break to try and get rid of Mushfiqur Rahim as the batsman was looking good for a half century.

In the fifth delivery of the 54th over, in-form Shami rattled Rahim's stumps with a searing inswinger that pitched outside off and came back in sharply to bamboozle the batsman. Mushfiqur was gone for a well made 43 off 105 balls, his innings laced with four fours and a six.

In the very next ball, Shami trapped new batsman Mehidy Hasan in front to go into the break on a hat-trick. Hasan thought of reviewing it, but after consultation with non-striker Liton Das (21 batting), he walked towards the dressing room.

Mahmudullah (10) and Rahim tried to forge a partnership and had the rub of the green too when the former limited overs captain was dropped on 7 by India vice-captain Ajinkya Rahane.

But Rahane was not made to pay for his mistake as Mahmudullah lost his stumps trying to sweep a straight Ashwin delivery.

Shami then further dented the visitors' cause with two wickets in two deliveries to take three wickets with Ashwin grabbing two.

Bangladesh were 63/3 at lunch after electing to bat first. It was a brave decision in the first place, but the fact that Indian pitches tend to turn square from the third evening onwards would have seen the visiting skipper Haque make the call and the Indian bowlers were at the top of the game from the word go.

The pace bowling trio of Ishant Sharma, Umesh Yadav and Shami finished with a wicket apiece in the first session of the opening day, but more importantly, they kept bowling a testing line and length. In fact, Kohli bowled ace spinner Ashwin for just four overs as the pacers kept piling the pressure on the Bangladesh batsmen.

Batting first on the wicket which already looked to be favouring the pacers meant that the opening duo of Shadman Islam and Imrul Kayes needed to play out the new ball.

But senior opener Kayes (6) was the first to go as Umesh bowled the perfect length outside the off stump to have Kayes poke at the ball. Rahane made no mistake grabbing it in the slip cordon.

With Kayes out in the sixth over, it was now important for Shadman to consolidate with skipper Haque.

But Ishant struck soon after as he once again like Umesh bowled the perfect line outside off to get Shadman to edge one straight to Wriddhiman Saha. With both the openers back in the hut by the seventh over, the back of the Bangladesh batting was already against the wall.

But that wasn't all as Shami then came in to send back Mohammad Mithun - trapped right in front for 13. The scoreboard read a dismal 31/3. That is when Haque and Mushfiqur came together and ensured that they don't lose any more wickets.

The only worry for the Indians was the fact that skipper Kohli dropped Mushfiqur off Umesh and deputy Ajinkya Rahane dropped Haque off Ashwin.