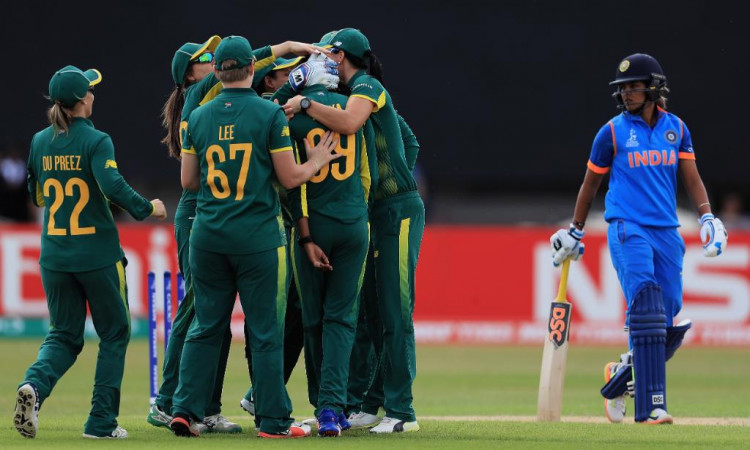 Surat, Oct 4:  The India women team lost their sixth and final T20I against South Africa by 105 runs here on Friday. Chasing a target of 176, India collapsed to a measly 70, although they looked to be set for a much smaller target when they were 13/6 in the seventh over. Veda Krishnamurthy and Arunadhati Reddy took them past the 50-run mark.

Nadine de Klerk took three wickets, including that of Smriti Mandhana, who has struggled to score runs in this series.

Fifteen-year-old opener Shafali Verma was the first wicket to fall in the third over to Shabnim Ismail. Ismail then got the wicket of Jemimah Rodrigues off the very next ball but couldn't complete her hat-trick.

Skipper Harmanpreet Kaur, who was playing her 100th T20I, was the next wicket to fall after which Mandhana fell in the sixth over. De Klerk would then snuff out Deepti Sharma in the same over and Taniya Bhatia fell a few balls later as the hosts found themselves at 13/6 in seven overs.

Krishnamurthy and Arundhati then stuck on till the 14th over to take India's total to 62 before the former was hit on the pads off Anne Bosch. It looked like there might have been an inside edge but the umpire raised the finger to signal the end of the partnership.

Arundhati fell two overs later to de Klerk and the Indians later folded in the 18th over with Nondumiso Shangase taking two wickets in the only over that she bowled in the day.

Earlier, South Africa were buoyed by a 144-run opening stand between Lizelle Lee and skipper Sune Luus. Lee was dismissed for 84 off 47 balls while Luus made 62.

The match was a dead rubber with India winning all of the previously held matches. The tour now moves to Vadodara where three ODIs will be played.