India vs S. Africa: 3rd Test to resume on Day 4 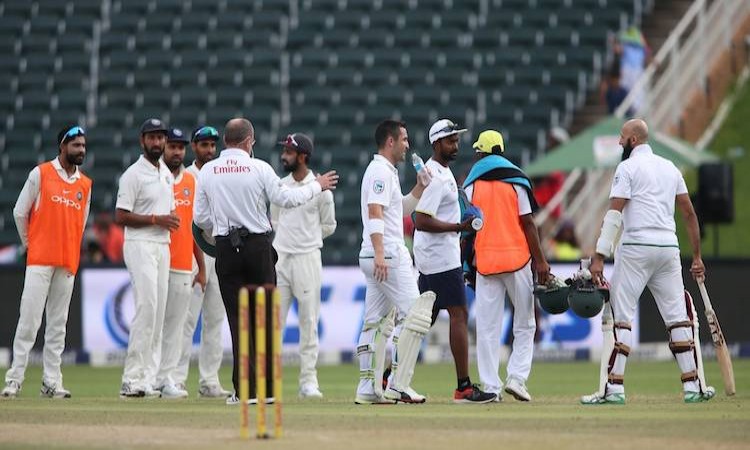 Johannesburg, Jan 27 - The third Test between South Africa and India will resume on Saturday after the third day's play was suspended before scheduled close as the condition of the pitch was discussed on Friday.

South Africa were 17/1 in their second innings, chasing 241, when, due to the odd and uneven bounce, play was called off as both the captains, India's Virat Kohli and South Africa's Faf du Plessis discussed the issue with match referee Andy Pyrcroft with close to 30 minutes left on the day's play.

The field umpires discussed the issue more than five times during the day, even during the Indian innings of 247 all out, with cracks appearing on the surface. On a few occasions the ball apparently kept low at the New Wanderers Stadium.

The umpires, however, discussed the matter with much more seriousness when South African left-arm opening batsman Dean Elgar (11 batting) was struck on the helmet by a delivery from Jasprit Bumrah. But it was a short delivery and climbed up to an usual height. But some of the back of length deliveries got odd bounce and struck on the bodies of the visiting and home batsmen.

"The on-field umpires, in consultation with the match referee, and after speaking with both the captains and groundsmen, have decided that the Johannesburg Test will resume on time on Saturday," International Cricket Council (ICC) wrote on Twitter.

"The on-field umpires will continue to monitor the pitch, and consult the match referee should the pitch deteriorate further. The welfare of the players is paramount and two of the most experienced match officials are in charge of the game and will take appropriate decisions," it added.

India were bowled out for 247 in their second innings.