Team India are on a good roll in T20Is this year, with 13 wins in 20 games. This included an Asia Cup title and a silver medal at Commonwealth Games. Indian Women's team would look to finish the year off on a high with a win against World Champions Australia.

However, the Alyssa Healy-led side is a much tougher competition as compared to teams who participated in the Asia Cup. Australia has a strong lineup and have an impressive record against India (6-1). It will also be a challenge for Hrishikesh Kanitkar, who recently took over as the batting coach while Ramesh Powar was shifted to NCA to work with the Men's team.

Smriti Mandhana, Jemimah Rodrigues and Shafali Verma have been shouldering the batting for team India this year and are the top three run-getters this year for the team. The batting will revolve around these three along with captain Harmanpreet Kaur. However, apart from Harmanpreet and Jemimah, all the other batters have struggled against the Australian team.

In bowling, Renuka Singh, Rajeshwari Gayakwad and Deepti Sharma have picked up 17 wickets combined against Australia since 2021 and will head the bowling department against World Champions. Richa Ghosh and Shafali Verma would also look to kick off their U19 T20 World Cup preparations, which is scheduled to be played next month.

While Australia's regular captain Meg Lanning has taken an indefinite break from cricket, Alyssa Healy will be leading the Australian side in the 5-match T20I series against India. Tahlia McGrath (289 runs) and Beth Mooney (244 runs) have been the top scorers for Australia this year in T20Is and would shoulder the batting along with Ellyse Perry and Healy. Healy had an off-season in the T20Is recently with only 78 runs in 9 innings, but her good run in WBBL would give provide her with some confidence.

Alana King has been the lead wicket-taker for Australia this year and is expected to enjoy bowling in the Indian conditions and should favour her leg-spinning attribute. Jess Jonassen, Tahlia McGrath and Megan Schutt would be the key bowlers for the Australian team against India women's team.

The 1st match between two competitive teams is expected to go down the wire with no clear favourites between India and Australia women's team. 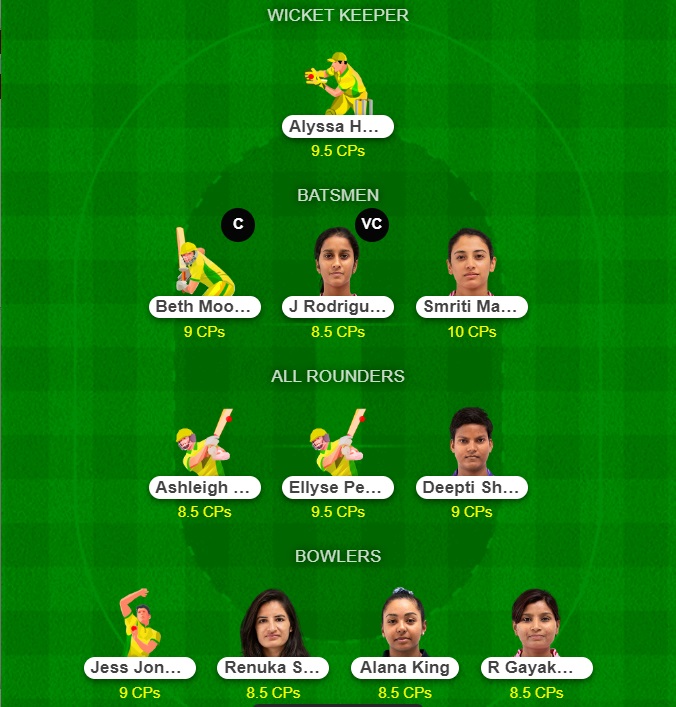