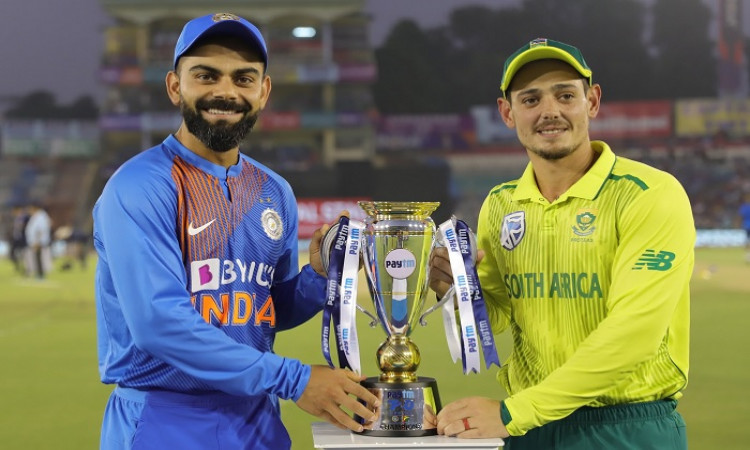 New Delhi, May 21:  With news coming in that Cricket South Africa (CSA) has expressed confidence that the Indian team will tour the Rainbow Nation in August for a bilateral series, the Board of Control for Cricket in India (BCCI) has said that it is quite difficult for the Men in Blue to travel to South Africa for a series in August.

Speaking to IANS, a BCCI official said that considering the current situation, it will not be possible to travel for the series to South Africa as there are players in the team who haven't had proper training sessions in the last 50-60 days.

"See, this is not really possible. Fitness training is one thing and training with the bat and ball is a completely different thing. We have guys who haven't touched a bat or ball in a training environment in the last 50-60 days. How do you expect them to go out and play international matches? Yes, they have been doing their best to keep their fitness level up to the mark set by our trainers, but batting and bowling sessions will be needed.

"Yes, like we have said before, the BCCI will honour all its bilateral commitments and if not currently, then as is suitable to both parties involved. But a series in South Africa in August is quite difficult," the official said.

"We have been talking to them and the commitment is there to get the three T20s done," Smith said at a news conference on Thursday. "There is an element of guesswork, no-one knows what things will be like at the end of August. But we believe we are a socially-distanced sport and that we can play behind closed doors."

CSA's acting chief executive Jacques Faul told a virtual media briefing on Thursday that the BCCI is keen to honour its commitment to tour the country.

"India wants to honour its agreement. If it's postponed, maybe a bit later," Faul said. "We've had a very good discussion with them."

Interestingly, India's last international assignment which got interrupted due to the outbreak of the novel coronavirus was against the Proteas in mid-March. While the first game was washed off in Dharamsala, the next two games in Lucknow and Kolkata were called off.