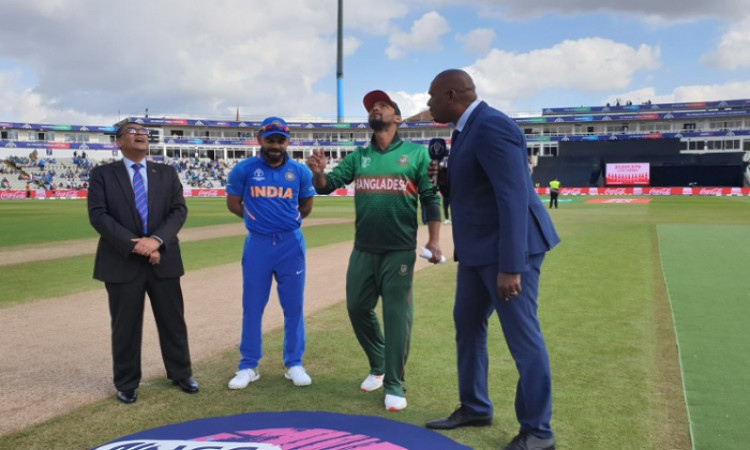 July 2 (CRICKETNMORE) India captain Virat Kohli on Tuesday won the toss and elected to bat against Bangladesh in their World Cup fixture at Edgbaston.

India have made two changes to their playing XI which featured against England. They have included Bhuvneshwar Kumar and Dinesh Karthik in place of Kuldeep Yadav and Kedar Jadhav.

Bangladesh have also made two changes to their line-up. They have included Rubel Hossain and Sabbir Rahman in place of Mehidy Hasan and Mahmudullah.

"We are going to bat first. It's a used pitch. In the last game, it was getting slower and slower. Looking at the shorter boundaries, one of wrist spinners -- Kuldeep -- misses out. Bhuvi comes in. Kedar is not playing and Dinesh Karthik replaces him," said Kohli after winning the toss.

"Not a bad idea to bowl against India. We love to win this do-or-die match. We have to play our best. Mirz (Mehidy Hasan) is not playing and Rubel is playing. Unfortunately, Mahmudullah isn't playing and Sabbir Rahman comes in his place," said Bangladesh skipper Mashrafe Mortaza.