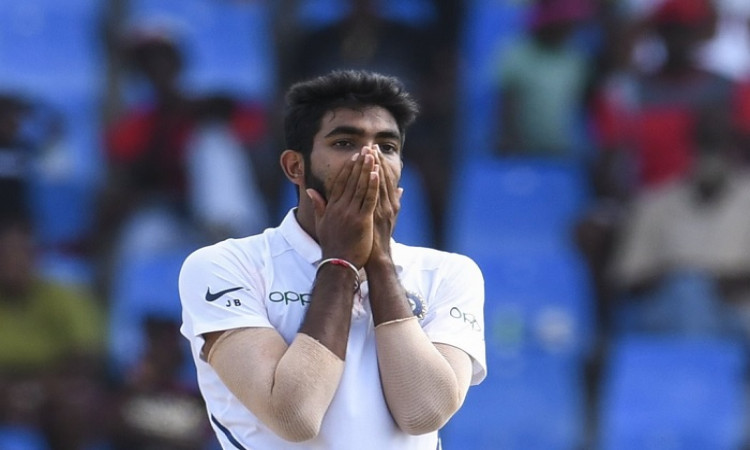 Kingston (Jamaica), Sep 1: Hat-trick hero Jasprit Bumrah finished with figures of 6/27 as India skittled West Indies out for 117 in the first innings and were 16/1 in the second innings with a healthy lead of 315 at Lunch on Day 3 of the second Test at Sabina Park here on Sunday. Despite taking a first innings lead of 299 runs, India didn't enforce the follow-on and went in to bat instead.

India, who were bowled out for 416 in the first innings, lost Mayank Agarwal (4) who was trapped in front by Kemar Roach. Agarwal went for a review but it was in vain. At the break, K.L. Rahul (6) and Cheteshwar Pujara (5) were at the crease.

Also Read: If I can hit sixer with bat, why can't I kill man with sword: Javed Miandad

Earlier, Bumrah finished with career best Test figures which included a hat-trick on Saturday, while Shami snared his 150th Test wicket with the scalp of debutant Rahkeem Cornwall (14) after the hosts resumed on 87/7 with Cornwall and wicketkeeper Jahmar Hamilton at the crease.

Hamilton, who also made his Test debut in this match, got out for 5 to give Ishant Sharma his first wicket of the match after the experienced pacer scored his maiden Test fifty on Day 2. Before that, Shami had Cornwall caught at gully by Ajinkya Rahane for the day's first wicket.

The last wicket, that of Kemar Roach, was taken by Ravindra Jadeja.