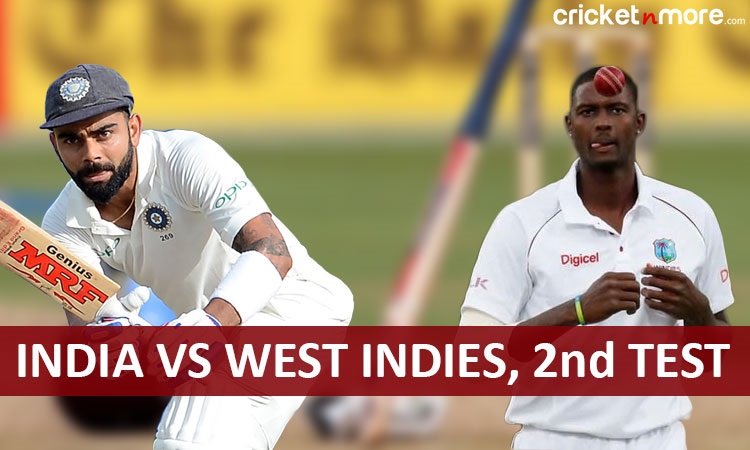 Hyderabad, Oct 11 (CRICKETNMORE):  India will aim for a clean sweep when they take on the West Indies in the second and final Test at the Rajiv Gandhi International Stadium, starting here on Friday.

India had completely dominated the visitors in the first Test as Virat Kohli's men had dismissed them twice within two days to win the issue by an innings and 272 runs.

Also Read: Want to be the new ball bowler who can bat too: Chahar

The hosts will once again look to overpower the inexperienced West Indies, which is unlikley to put up a challenge against the No. 1 Test side in their own backyard.

The hosts are likely to stick to the same playing eleven as India announced the same 12-member team for the 2nd Test which means Karnataka opener Mayank Agarwal and pacer Mohammed Siraj will have to wait for their maiden Test caps.

Looking at Indian batsmen's impressive form and a batting friendly Hyderabad wicket, Kohli's men are likley to put up a mammoth score.

The only cause of concern for the Indian team management is Rahane, who last scored a hundred against Sri Lanka in August 2017. It would be the last time for the Indian vice-captain to get back in form before the Australian tour, starting in December.

In the bowling department, Kohli will stick to three spinners -- Ravichandran Ashwin, Ravindra Jadeja and Kuldeep Yadav. Umesh Yadav and Mohammad Shami will lead the pace attack in the absence of Jasprit Bumrah and Bhuvneshwar Kumar, who have been rested for the short series.

Kuldeep will try to replicate the Rajkot show, where the chinaman returned with figures of 5/57 in the second innings and another impressive outing will possibly confirm his ticket to Australia.

On the other hand, the West Indies need to come out with something special to challenge the confident Indian team.

Their batsmen succumbed to the Indian bowlers in Rajkot as the team failed to touch the 200-run mark in both the innings.

Kieran Powell's 83 and Roston Chase's 53 were the only notable contributions from the visitors' batting line-up in the first game.

In the bowling department, spinner Devendra Bishoo picked up four wickets, but leaked 217 runs in his 54-over spell.

A major relief for the visitors will be the return of pacer Kemar Roach and all rounder Jason Holder, who was sidelined due to injury.