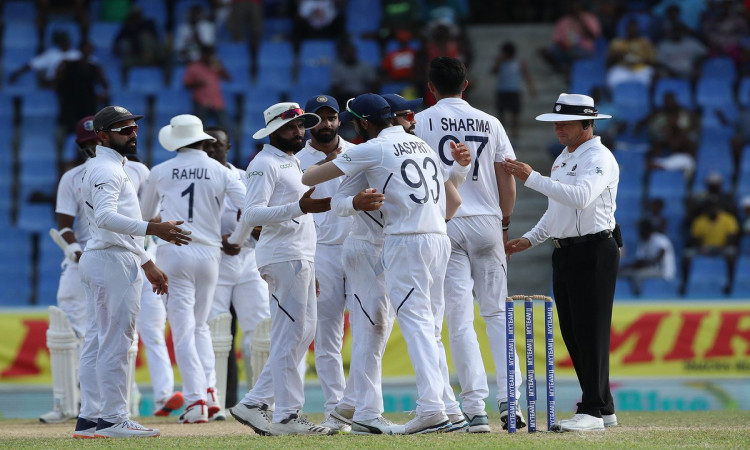 North Sound (Antigua), Aug 26: It seemed the Indian pacers were in a hurry to finish things off as they bundled out the West Indies for a paltry 100 runs in their second innings, setting up a mammoth 318-run victory on the fourth day of the first Test here. Jasprit Bumrah scalped a fifer conceding just seven runs while his teammate Ishant Sharma picked three for 31.

In the process, Bumrah also became the first bowler from Asia to take five-wicket hauls in Australia, England, South Africa and the West Indies, in only his 11th Test. The win not only gave India 1-0 lead in the two-match series but also 60 points in their inaugural World Test Championship match.

It was also India's fourth-biggest Test win besides being the biggest in away Test.

Chasing a huge 419-run target, the Windies batsmen lacked patience as only three of them could touch the double digits. Kemar Roach with 38 was the top scorer for the hosts.

Kraigg Brathwaite (1) was the first two go, caught behind off Bumrah. John Campbell (7) was castled by the same bowler while Ishant trapped debutant Shamarh Brooks (2) in front.

Darren Bravo was clean-bowled by Bumrah and Shimron Hetmyer (1) was caught at slip by Rahane off Ishant, making up for Virat Kohli dropping him earlier as the Windies were reduced to 15/5 at Tea.

In the final session, the visitors continued their dominance as Bumrah struck again, this time sending back Shai Hope (2) and soon he also accounted for the wicket of Jason Holder (8), which saw Windies reeling at 37/7.

After Bumrah and Ishant, Mohammed Shami also joined the party as he dismissed both Roston Chase (12) and Shannon Gabriel (0) in the 20th over as the Windies scorecard read 50/9.

Roach and Miguel Cummins (19*) showed some fight with their 50-run partnership for the 10th wicket, however, it was too little too late and as Ishant put the final nail in the coffin, sending Roach packing in the 27th over.

Earlier, resuming the fourth day at 185/3, vice-captain Ajinkya Rahane scored his first hundred after 17 Test matches, his 10th in the five-day format while Hanuma Vihari too, did well with a 93, missing out on his maiden Test hundred by seven runs as India declared on 343/7, setting a stiff target for the hosts in the second innings.

Rahane, who top scored with 102 from 242 balls, was caught at mid-off by Windies skipper Jason Holder off Shannon Gabriel while Vihari was caught behind by Shai Hope off Holder.