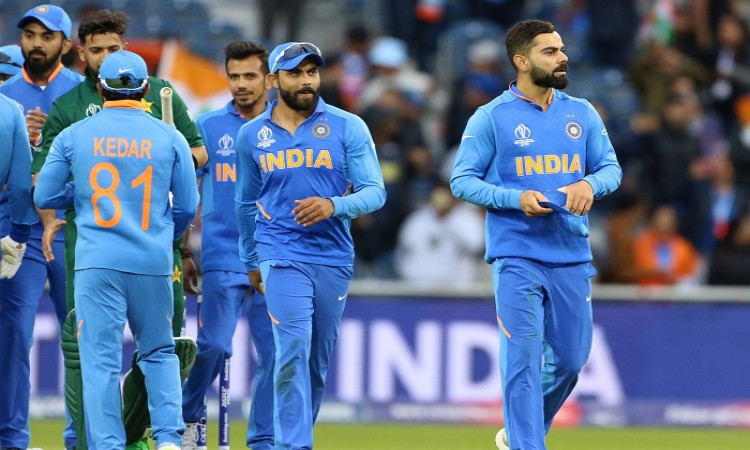 Put to bat first after Pakistan captain Sarfraz Ahmed won the toss, India, powered by Rohit Sharma's 140 (113), set a target of 337. Pakistan, in reply, reached 166/6 in 35 overs before rain caused a temporary halt to the proceedings. On resumption, their revised target was 302 and they had to chase it down in 40 overs. Only managing to reach 212/6, they fell to their third defeat of the tournament.

Pakistan were dealt an early blow in the chase when Vijay Shankar dismissed Imam-ul-Haq off his very first ball of the match. Brought on to finish the fifth over after Bhuvneshwar Kumar pulled up with a hamstring injury after bowling the fourth ball, Shankar sent in a full delivery that swung back into the left-handed Imam and hit his pads. Imam decided not to review the decision and Pakistan lost their first wicket inside the first five overs.

Shankar is the third bowler to have taken a wicket off his very first ball in the World Cup.

However, Fakhar Zaman and Babar Azam temporarily steadied the ship for Pakistan with a 104-run stand for the second wicket. The pair struggled for runs early on but soon found their rhythm and pegged back the Indian pacers. The breakthrough eventually came only after Virat Kohli introduced the spinners.

Kuldeep Yadav, bowling the 24th over, disturbed the stumps behind Babar with a tossed-up delivery that drifted away from the 24-year-old.

In his next over, he got Zaman and it was all downhill for Pakistan from there.

Hardik Pandya came in then and dismissed veterans Mohammad Hafeez and Shoaib Malik off consecutive balls in the 27th over. Sarfraz Ahmed then became Shankar's second wicket of the day and Imad Wasim and Shadab Khan werein the middle when rain brought a stop to the proceedings.

With the target revised down to 302 - but in 40 overs, Pakistan now needed to score 136 runs off the last five overs. Imad and Shadab managed to take them to 212/6.

Rohit Sharma led the charge for India with the bat. The Indian vice-captain hit his second century of the tournament and shared a 136-run opening stand with K.L. Rahul. Rahul, batting at the top of the order in place of the injured Shikhar Dhawan, scored 57 off 78 deliveries before falling to Wahab Riaz.

Rohit was then ably given company by captain Virat Kohli and the pair added 98 for the second wicket. Rohit eventually fell to a loose shot off Wahab after which Kohli anchored the latter end of the innings. He was eventually dismissed when he seemingly got a faint edge to the keeper off Mohammad Amir. Although Kohli walked, umpire Marais Erasmus never raised the finger and replays showed that there was a significant gap between the bat and ball.

This is India's third win of the tournament and they jump to third on the table, behind second-placed New Zealand on the basis of net run rate. Pakistan, who sink to the ninth place, now need to win all of their remaining matches to make it to the knockouts.