In a first, Singapore clinch win over full member nation 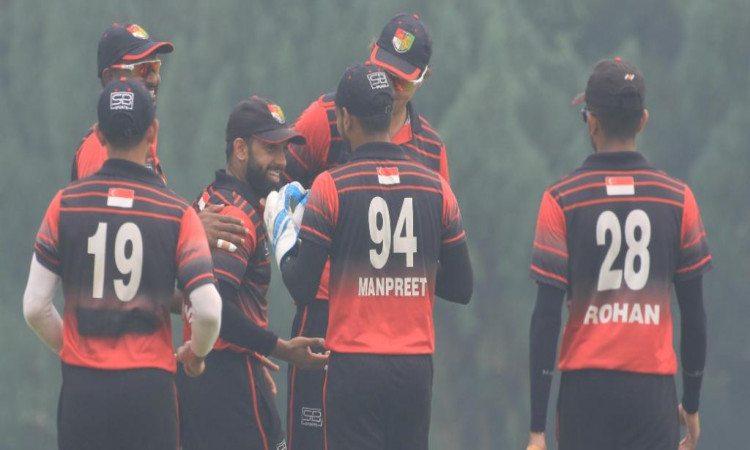 Singapore, Sep 30:  Singapore battled hard with bat and ball to clinch a historic four-run win over Zimbabwe in the rain-affected third match of the Singapore T20I Tri-Series 2019.

In a match which was reduced to 18 overs a side due to rain at the Indian Association Ground, hosts Singapore put up a strong total of 181/9 which they defended successfully to register their first ever win over Zimbabwe.

Also Read: Will bounce back to being the team we were: Shakib Al Hasan

Despite losing wickets at regular interval, Singapore rode on a pair of 41s from Tim David and Manpreet Singh to put up a fighting total. Ryan Burl was the pick of the Zimbabwe attack, picking up three for 24.

In reply, Zimbabwe looked on course of reaching the target as Regis Chakabva (48 off 19 balls) smashed Singapore's bowlers to all parts of the ground. Thereafter, skipper Sean Williams and Tinotenda Mutombodzi built on Chakabva's good work to take Zimbabwe to 142/2 in the 14th over.

However, two overs later, Williams fell for 66, and it resulted in a collapse. Burl and Richmond Mutumbami fell in the penultimate over as the required rate crept up, and Singapore's Sidhant Singh held his nerve to defend 10 off the final over and take his side to their first ever win over a Full Member in international cricket.