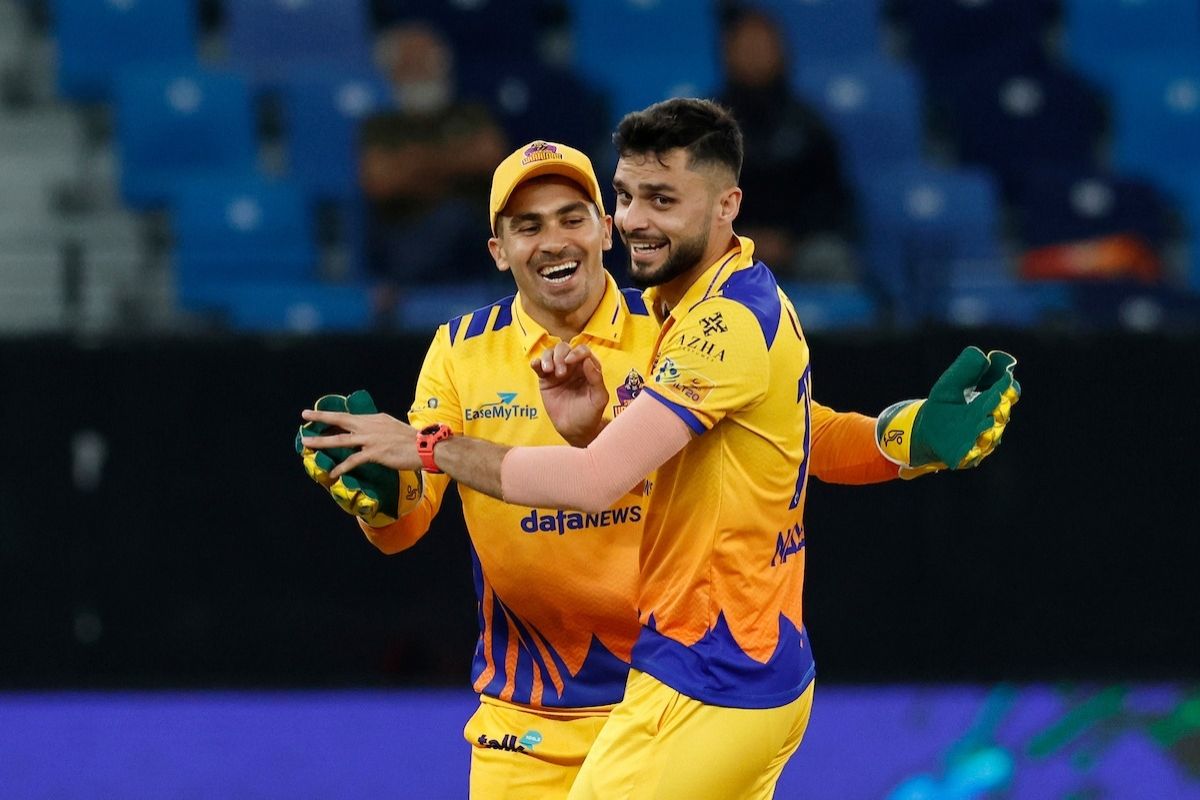 Naveen-ul-Haq was backed by Chris Woakes (2-11) and Junaid Siddiqui (2-18) as they bowled with clinical accuracy and bundle out Gulf Giants for 130 in 19.4 overs


BCCI, PCB Likely To Clash Over Calendar At ACC Board Meeting

Sharjah had posted only a modest total of 151/7 in 20 overs. They came into this match defeating Dubai Capitals and thus recorded their second win while Gulf Giants' four-match winning streak came to an end.

It was surprising that despite the heavy rains till one hour before the start, the match could commence on time. It was mainly due to Dubai International Stadium's superb drainage system. The result of the match was even more surprising. For Sharjah Warriors Joe Denly top scored with 58 runs off 43 balls with four boundaries and two sixes. Chris Jordan had bagged three wickets for 25 runs to restrict the run flow.

Gulf Giants won the toss and elected to bowl. Sharjah opener Rahmanullah Gurbaz got out to the second ball of the third over, hitting David Wiese high to Chris Lynn at deep backward square for 8. Opener Tom Kohler-Cadmore, with scores of 55 and 106n.o from his last two matches, hit Wiese for a six over square leg and then hit two consecutive sixes off Sanchit Sharma in the fourth over. Richard Gleeson struck in the sixth over to take the prize wicket of Kohler-Cadmore for 36. His 20-ball knock had two fours and three sixes.

Sharjah lost their third wicket at the score of 50 in 6.2 overs when one-drop Dawid Malan flicked Sharma to Shimron Hetmyer at deep backward square for 5. Skipper Moeen Ali and Joe Denly began the damage control. Chris Jordan bowled a tight eighth over giving away just four runs. Denly hit Rehman Ahmed for a six over the bowler's head in the ninth over. Ali too hit a six off Wiese over long-on and by the halfway mark, Sharjah were 78 for 3. In the 11th over, Ahmed removed Ali caught by Hetmyer at deep mid-wicket for 16. This squashed Sharjah's chances of a big score.

Mohammad Nabi joined Denly and the score reached the 100-run mark in 13 overs. In the 17th over Sharjah lost Nabi to Jordan for 20 after he had added 40 runs in 32 deliveries with Denly for the fifth wicket. Denly continued to hit freely and reached his half-century in 37 balls. Jordan had Denly hit straight to Wiese at long off to the first ball of the last over for 58 and also had Chris Woakes caught and bowled for 4 to the fifth ball. In the last five overs, Sharjah could score only 33 runs and posted 151 for 7.

Chris Woakes gave Sharjah a brilliant start by having opener Rehan Ahmed out on 4, slicing to Denly at backward point to the fourth ball of the first over. Naveen inflicted another big blow on Gulf Giants by dismissing skipper James Vince caught at first slip by Kohler-Cadmore for 1. In the fourth over, UAE's Junaid Siddiqui struck to have Tom Banton drive in the air to Nabi at mid-off for 5. When Woakes struck again in the fifth over to have Afzal Khan edge to Kohler-Cadmore to take another catch at slip, Gulf Giants were tottering at 22 for 4 in 4.5 overs.

Half the Gulf Giants batsmen were back in the dug-out for 26 when Siddiqui took the prize wicket of Hetmyer, caught behind, off an edge to his pad on its way to wicketkeeper Gurbaz for 2. The cream of Gulf Giants' batting was wiped off in a flash.

Naveen struck again to force Liam Dawson's play into the hands of Kohler-Cadmore at backward point. At the halfway mark, Gulf Giants were 46 for 6. Lynn and Wiese put on 41 runs for the seventh wicket before Noor Ahmed had Lynn on 20 caught at long-on by Woakes. Naveen picked his third wicket removing David Wiese caught by Woakes at long off for 35. Wiese had put on 27 runs with Chris Jordan for the eighth wicket and that was the last of the Gulf Giants' resistance. Jordan delayed Sharjah's victory by adding a fighting 37 runs before falling to Naveen.

Speaking about their victory, Sharjah Warriors' captain Moeen Ali said, "We spoke among ourselves that we have a score and we bowled really well tonight. We've got three big games coming up in Sharjah. Hopefully, we can win two out of those."

Meanwhile, Gulf Giants' head coach Andy Flower said, "Chris Woakes was brilliant with the ball. He showed what a class bowler he is. He produced Test match bowling. They exploited the conditions very well and a couple of soft dismissals put us behind the game. But I was heartened by the way Chris Jordan and David Wiese fought towards the end."

Meanwhile, Gulf Giants' head coach Andy Flower said, "Chris Woakes was brilliant with the ball. He showed what a class bowler he is. He produced Test match bowling. They exploited the conditions very well and a couple of soft dismissals put us behind the game. But I was heartened by the way Chris Jordan and David Wiese fought towards the end."