If it's in my arc, I back myself: Hardik Pandya after smashing 39-ball 105

Navi Mumbai, March 3: Fit-again India all-rounder Hardik Pandya sent a strong message ahead of the South Africa ODI series where he is eyeing a comeback by smashing a whirlwind 105 off just 39 balls 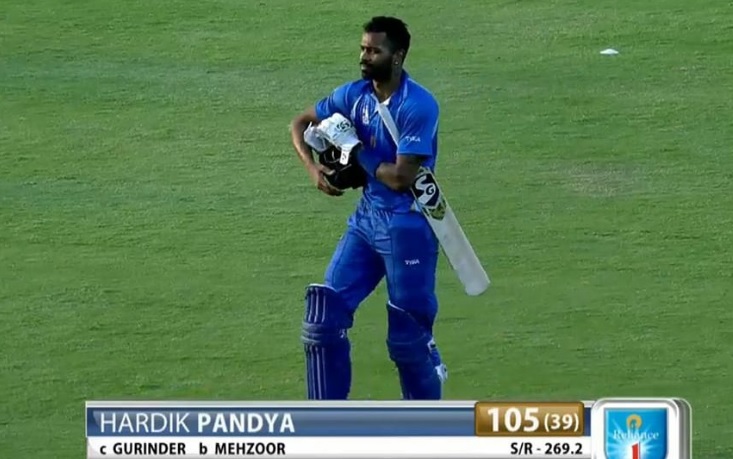 Navi Mumbai, March 3: Fit-again India all-rounder Hardik Pandya sent a strong message ahead of the South Africa ODI series where he is eyeing a comeback by smashing a whirlwind 105 off just 39 balls playing for Reliance 1 against CAG in a Group C encounter of the 16th DY Patil T20 Cup at the Reliance Corporate Park here on Tuesday.

Hardik was at his brutal best as he hit eight fours and 10 huge sixes en route his blitzkrieg as Reliance 1 posted 252/5 in 20 overs. After the innings, Hardik said he is happy with the way he is shaping up after being away from the game for almost six months.

"It's fantastic (platform) for someone like me. I have been away for almost six months. This is my second game after a long time. For me it is a good platform to see where I am currently and test my body. I am really happy with the way things have gone," Hardik said on DY Patil Sports Academy Facebook page.

On his big-hitting prowess, the 26-year old added: "If it's there in my arc I just back myself and go for it. Most of the times, it comes out pretty well. There is no plan that I am going to go out there and smash it."

Pandya showed his all-round skills with a knock of 38 off 25 balls to help his side post 150 for eight in their 20 overs in the first match as well.

Pandya underwent a surgery after suffering a lower-back injury five months ago and has since been on a road to recovery. He could not be fit in time for the New Zealand tour but started bowling at the National Cricket Academy (NCA) in Bengaluru after returning from a check-up in UK.

The all-rounder last played a T20I against South Africa in Bengaluru in September last year. India take on the Proteas again in three one-dayers starting March 12 in Dharamsala. The second ODI will be held in Lucknow on March 15 followed by the final one in Kolkata on March 18.