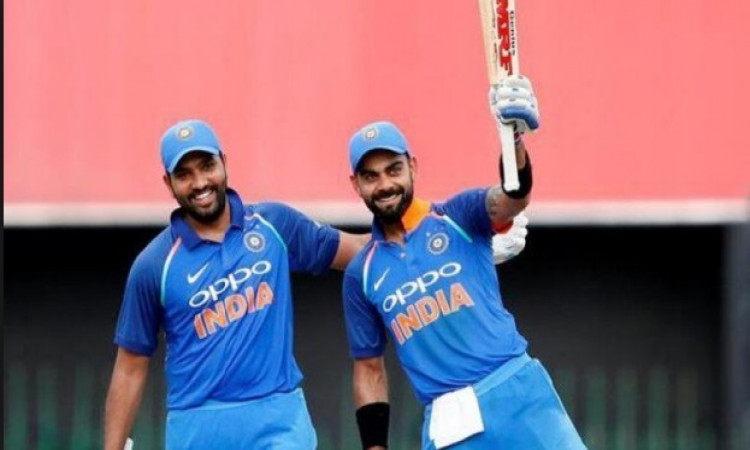 July 8 (CRICKETNMORE) Indias limited-overs deputy Rohit Sharma has been on a roll with 647 runs from 8 innings that includes 5 centuries. As the team heads into the semi-final against New Zealand, skipper Virat Kohli once again acknowledged the role Rohit has played at the top of the order for India. In fact, Kohli went on to add that he was not disappointed at missing out after scoring five fifties as his role has been different.

"It's been a different kind of role that I've had to play in this World Cup and, as the captain of the team, I have been open to playing any kind of role that the team wants me to, so it's great that Rohit is scoring so consistently which means that coming in the later half of the innings you have to play a different role which is controlling the middle overs and letting guys like Hardik (Pandya), Kedar (Jadhav), MS (Dhoni) in the past few games, and now Rishabh (Pant), come out and express themselves.

Also Read: Dhoni gives me space to discover myself and isn't pushy: Kohli

"Personal milestones honestly is something that no-one ever focuses on. Rohit said the same thing the other day. He is only trying to do the best for the team and in that process special things happen which is something that I have always believed in my career so far. I could never imagine that I could get the number of hundreds I have and the only focus has always been the team," he smiled.

But Kohli wants Rohit to continue the good show and hit two more centuries to help India lift the trophy at Lord's on July 14.

"So, I think playing a team sport you need to adapt and I'm very happy doing that role and I hope he gets two more so we can win two more games (smiling). It's an outstanding achievement. I have never seen anyone get five hundreds in a World Cup, be any tournament, so World Cup is all the more pressure and he has been outstanding and he deserves all the credit. According to me, he is at the moment the top ODI player in the world," he said.

Asked to elaborate further on his own role, Kohli said: "So I have understood that roles can vary a lot in one-day cricket, depending on the time you step into bat, and I have been very happy with holding one end and letting guys express themselves striking at 150, 160 or 200 if the team needs and I can accelerate in the end."

But Kohli also realises that it will not be easy against the New Zealand bowlers, especially if the overhead conditions help them. "The New Zealand attack has always been a very balanced bowling attack. Their pacers are very consistent. Mitchell Santner brings in a lot of control with his skills in the middle overs. So they are a team which has always been a very consistent team, so we know that against them we'll have to be very, very disciplined, at the same time we will have to play very correct cricket to score runs against them because they are bowling good lines and lengths and they know what they are doing.

"So, we have to be sure of what we are doing and that's the kind of challenge that the team brings. They put the ball in the right areas and then make you play good shots. So, it's going to be a nice battle. We have played against them a lot. But they are a quality side with very, very potent bowling attack," the captain pointed.

Asked about the Indian bowling attack, Kohli said: "Well, according to me, our bowling attack has been up there with the best, if not the best bowling attack in the competition. I think the way we have bowled in low-scoring games, even coming back into the match when the guys have been hit, I think they have shown a lot of character."