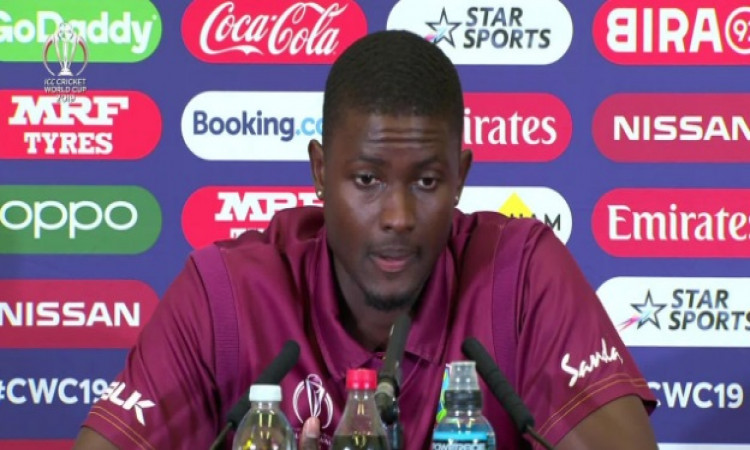 May 31 (CRICKETNMORE) After registering an impressive seven-wicket win over Pakistan, West Indies skipper Jason Holder praised his bowlers for wrapping up the Green Brigade for a paltry 105 runs and said his focus is to play some fearless cricket.

West Indies overhauled the meagre target in 13.4 overs, thanks to opener Chris Gayle's 50 followed by Nicholas Pooran's unbeaten 34 as they comfortably guided their side to an easy win.

Speaking at the post-match presentation, Holder said: "Got off to a really good start. Got wickets with the new ball which is what we ask of the guys. Russell is an impact player. Really good to see the impact he had today, followed by Oshane Thomas. Sheldon (Cottrell) started really well for us. Credit to the boys who stuck to the task. Russell can get the ball through, bowled some sharp balls today. He's one who gives 100% every time even though he might not be 100 per cent. Good to have a young quick."

"We know Oshane (Thomas) can be expensive, but he's a genuine wicket-taker and that's a gamble we're willing to take. With such high totals these days, you need to get wickets. We see him as an impact player. Chris started us off tremendously. He eases the pressure in a chase like this. He imposed himself and kept them at bay. Wanted to start with a win. Been a long build-up to the tournament. Been anxiously waiting for this first game. Good to get it out of the way," he added.

The Windies skipper added that he wants to play fearless cricket and make the people back home proud.

Meanwhile, Pakistan skipper Sarfaraz Ahmed said his batting department failed to click, resulting in a defeat for his side.

Sarfaraz said: "If you lose the toss in these conditions, and lose wickets, it's hard to come back into the game. Have to play positive cricket here. Didn't do well as a batting unit today. We know they're going to come hard with their pace bowlers. We didn't play well against the short ball."

He however, seemed confident of making a comeback in the tournament and showered praise on pacer Mohammad Amir, who picked up three wickets for just 26 runs.