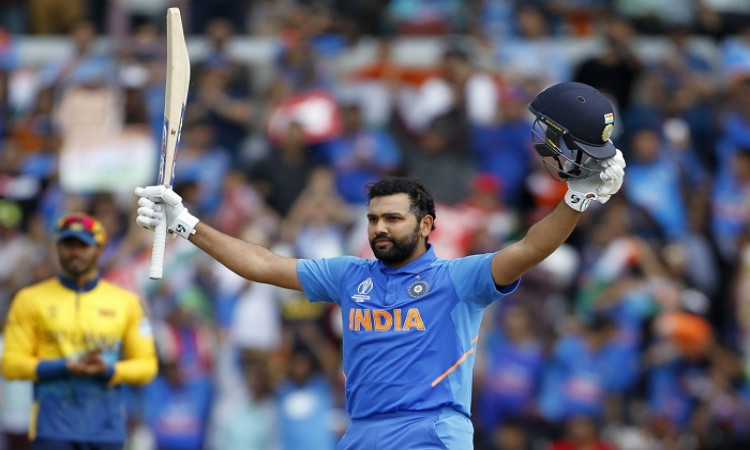 Leeds, July 7 (CRICKETNMORE) Rohit Sharma became the batsman with the most number of centuries in a single World Cup when he slammed his fifth hundred of the ongoing edition against Sri Lanka in India's last group stage encounter at the Headingley Cricket Ground on Saturday.

The India vice-captain, who was tied with Kumar Sangakkara with four centuries, got past the former Sri Lanka captain against his own team by milking Kasun Rajitha for a four down the square leg boundary after playing three dot balls in the 29th over.

Overall, this was Rohit's six World Cup hundred with one coming against Bangladesh in the quarterfinal of the 2015 edition.

Rohit looked in sublime touch from the word go after Sri Lanka posted 264/7 in 50 overs, a score which is incidentally Rohit's highest in ODI cricket, which also came against the Lankans.

During the course of his innings, the ace opener also became the highest run-getter in the group stages of a single World Cup.

Rohit went past Shakib Al Hasan's tally of 606 runs in eight innings when he reached 63. On Friday, Shakib broke Sachin Tendulkar's record made in the 2003 edition when the Master Blaster scored 586 runs in nine innings in the group stages.

The leading scorer in the ongoing World Cup, Rohit also became the second Indian after Tendulkar to amass over 600 runs in a single edition of the showpiece event.

Mathew Hayden had scored 580 runs in the group stages of the 2007 World Cup to be placed fourth in the list now.