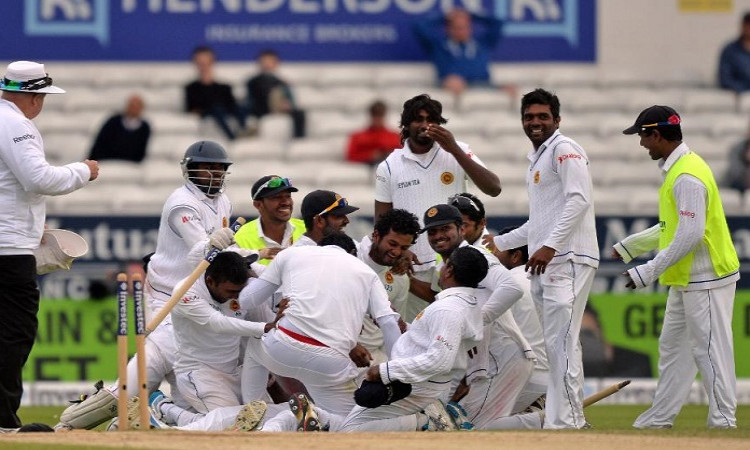 Port Elizabeth Feb 23 (CRICKETNMORE):  Just a couple of months ago, the Sri Lanka cricket team were literally down in the dumps, having suffered a humiliating 0-3 whitewash in a home Test series to England.

But the situation has changed dramatically in a short span of time. On Saturday, the Lankans thrashed South Africa by eight wickets in the second Test here to sweep the two-match series and become the first Asian team to win a Test series in the rainbow nation.

Chasing a target of 197 runs in their second innings on the third day at St George's Park, the visitors rode unbeaten half-centuries from Kusal Mendis and Oshada Fernando to wrap up the victory in style.

The triumph in the first Test was dramatic as the Lankans pipped the Proteas by one wicket in Durban.

Sri Lanka and South Africa have been playing Test cricket against each other for 26 years. In that time, the Lankans had played 13 Tests in the African nation before this series of which they had won only one.

The fact that Sri Lanka had suffered series defeats in New Zealand and Australia not too long ago -- apart from the home thrashing to England -- makes this dramatic turnaround literally feel out of the blue.

What made the series victory even more improbable was the fact that this was a rag tag Sri Lanka squad. The islanders were without their designated captain Dinesh Chandimal, who missed out on selection due to poor form. On top of that, two of their main fast bowlers were injured as was the in-form Angelo Mathews.

Facing them was one of the most intimidating pace attacks the cricketing world has to offer. In the veteran Dale Steyn, the hosts had arguably the best fast bowler of the last generation while Kagiso Rabada is one of the best in the current lot. In Duanne Olivier, the Proteas have another young in-from fast bowler who has made an excellent start to his international career.

"Massive dent. I thought up until this Test series we were looking good and playing well at home, but the last two Test matches, I wish I can give you an answer but we prepared the way we do and we didn't take them for granted," a devastated Proteas skipper Faf Du Plessis was quoted as saying by espncricinfo.

"Maybe, mentally the boys were off the boil at the end of a long season, but that's not an excuse once again. It's probably up there with the most disappointing series loss, certainly from my own personal point of view and also from a team perspective," he added.

The hosts were badly let down by their batting line-up with no South Africa batsman managing to reach three figures in the series.

Du Plessis however refused to blame the pitches, insisting that his batsmen need to introspect and pull up their socks ahead of their next international assignment.

"I would see that as an excuse if anyone in the team used that," he said. "Certainly, that's not the language I've heard in the dressing room. Whatever happened in the past has absolutely no bearing on the Test match you are playing. Everywhere you go as a batter, you need to adapt your mindset and score runs on whatever you see in front of you on the day. So, for me that's an absolute no-no," he remarked.

"This was a very good pitch and I think both teams throughout this series have batted poorly. Today was the first time two guys put a partnership together and made it look easy. When I was batting in both innings, I felt it was a really good batting pitch and like I said both teams did not put on the runs like they should have," he added.

"Mentally, we were a bit soft in giving our wickets away and cricket is about fighting it out and grinding it out. Bowlers have to earn your wicket and for most of the series all of our batters gave away their wickets pretty easily. There are no fingers to be pointed at the wicket. Probably 99 percent of our dismissals were soft, judgement errors and that's the only finger pointing backward at ourselves."