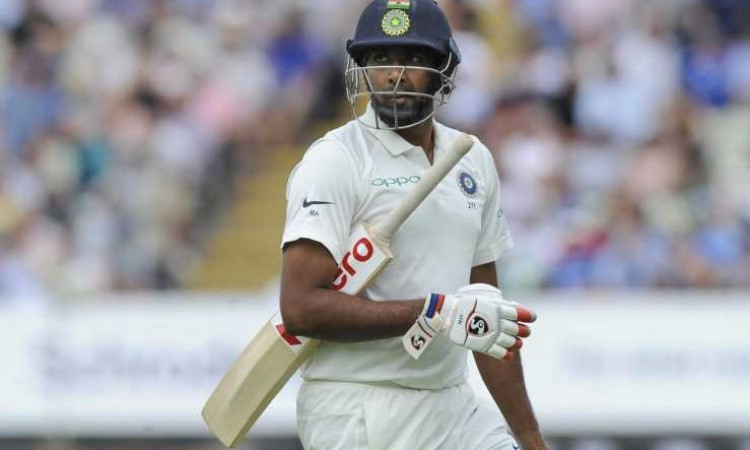 Wellington, Feb 23:  India off-spinner R. Ashwin feels he has been too watchful lately while batting and said he needs to correct that approach and be positive in order to get runs, after failing with the bat in the first Test against New Zealand.

Pace spearhead Trent Boult snared three wickets as New Zealand maintained an upper hand over India who had Ajinkya Rahane and Hanuma Vihari to thank for their resistance as the visitors ended the third day on 144/4, still 39 runs behind the hosts' lead, at the Basin Reserve here on Sunday.

"The only secret to how I was successful in the past is to try and be positive. That's exactly how I played. I personally feel I have been a little too watchful and a little too worried about getting out in the recent past. That's something I have tried and get over in the home games. Hopefully, I will try and put it to rest, see the ball and hit it. Just far too much going in the head won't work," Ashwin said after the day's play.

In the first innings, Ashwin could not open his account and was castled by Tim Southee. India will need to bat out of their skins to stand any chance of turning the tables on the hosts with two days to go. Ashwin will also have to contribute with the bat at some point.

"I know... to keep it simple and say, this is something defendable and this is not, it's pretty much how you would want me to present it. But, it's like six sessions to go in the game. We can't afford and not even in the stage to think of what's a good score to defend.

"If we can get as close to the 1st innings score as they did, then we might present an opportunity to ourselves to do something. That's very far away. We want to take it every ball at a time because there is still enough on the surface," Ashwin said.

India have failed to get the tail out in the past, and on Sunday too, the Kiwis added 132 runs for the last three wickets after being 225/7 at one stage. Debutant Kyle Jamieson hit 44 off 45 balls (1x4, 4x6) as all-rounder Colin de Grandhomme (43 off 74b;
. 5x4) also chipped in to help the hosts stretch their lead. The pair shared a 71-run stand for the eighth wicket. Trent Boult further frustrated the tourists with his 24-ball 38-run cameo. Ashwin took three wickets but went for a lot of runs.

"I think sometimes we pay too much (attention) to saying we need to bowl out teams far quicker. I am not saying we shouldn't. But batsmen don't get out anymore. Lower-order batsmen put a price on their wickets. If you were on true wickets, sometime 20-25 years ago, you will probably end up with a fifer," Ashwin pointed when asked about India's inability to get the lower order batsmen out.

"Jamieson... I think he has got a couple of 1st-class hundreds, if I am not wrong. His name... Patel, he can bat well. You have got to give credit where it's due.

"They understand these conditions really well and they use it to their advantage. They try and hit it with the wind. That's something we should learn quickly from them," he added.