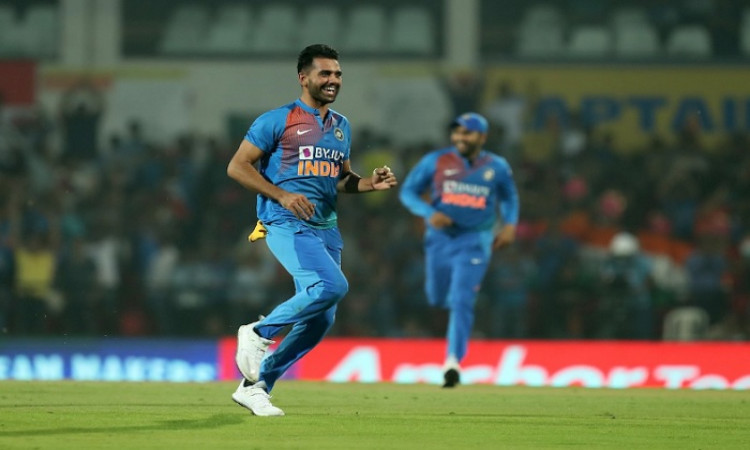 Nagpur, Nov 11: Deepak Chahar took apart the Bangladesh batting order on Sunday to hand India a 30-run win that helped the Men in Blue clinch the three-match series 2-1 at the VCA Stadium here on Sunday.

The 27-year-old Rajasthan seamer bagged 6 wickets for just 7 runs, including a hat-trick, from 3.2 overs to return with the best ever figures in the history of T20 internationals, surpassing the previous record held by Sri Lanka's Ajantha Mendis who scalped 6/8 against Zimbabwe in 2012.

Chahar thus became the first Indian male cricketer, and 12th overall, to take a hat-trick in T20 internationals. In women's cricket, Ekta Bisht had taken a hat-trick against Sri Lanka in 2012.

In the list of Indian bowlers in T20 internationals, Chahar bettered the figures of Yuzvendra Chahal, who held the previous record of 6/25 which came against England in 2017.

With Bangladesh chasing 175 for victory, Man of the Match Chahar started off with two early blows in, dismissing opener Liton Das and Soumya Sarkar off consecutive deliveries in the third over.

He then broke a 98-run third wicket stand between Mohammad Naim and Mohammad Mithun that threatened to take the match away from India by dismissing the latter.

He then got the wicket of Shafiul Islam off the last delivery of the 18th over and then returned to dismiss Mustafizur Rahman and Aminul Islam off the first two balls of the 20th over to complete his hat-trick.

Chahar's heroics on Sunday took his series tally to 8 wickets for 56 runs in 10.2 overs.