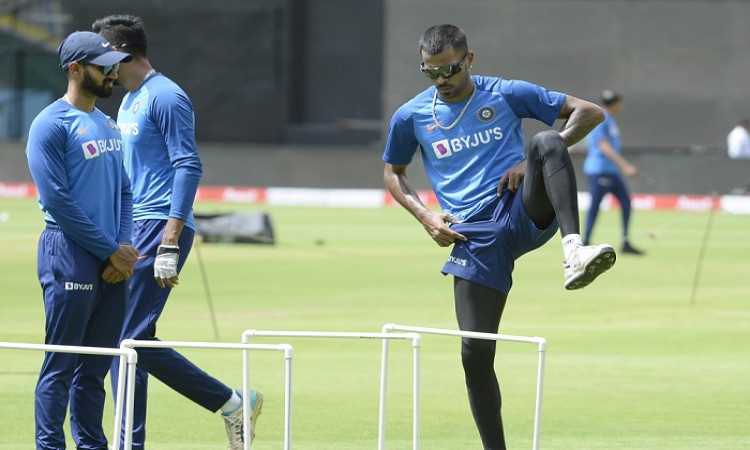 Kolkata, Jan 13:  India all-rounder Hardik Pandya being withdrawn from the 'A team for the tour of New Zealand in the eleventh hour raised quite a few eyebrows with some even saying that he failed a fitness test. But it has now been revealed that the all-rounder himself wants to spend some more time working on his back before he returns to action.

Speaking to IANS, BCCI sources in the know of developments said that there wasn't any fitness specific test on Pandya and he just underwent high intestine bowling session to check his back. And at the end of the two-hour session, the all-rounder wasn't satisfied and it was then decided that he would continue working on his back before making a return.

"The player is tested after he spends more than two to three hours at the nets. Now, when the player bowls for that duration, the bowling is monitored. Rhythm, speed, accuracy and how the player is coping with his plans and delivering is what is basically tested. So, if the body can't take what the player has in the mind, it is not responding to the workload. Pandya was of the opinion that he wants to work on his back further," the source explained.

"Yo-Yo and all he will clear in his sleep. He is looking at a South Africa series return and will continue to work on his back till then as he doesn't wish to take any half measures."

This comes as no surprise because speaking to IANS, Pandya had himself said that he was looking to make a comeback only in the second half of the New Zealand tour.

"I will be coming back before the New Zealand series, mid-way actually. That was the plan that I play some international games, the IPL and then the World T20. The biggest concern was the World T20 which touch wood is now in place.

"I was managing the back, tried everything possible not to get into surgery or anything. After trying everything, we came to the conclusion that it wasn''t working. I noticed that I was not able to give my 100 per cent and that meant I was not doing justice to myself and the team. That is when I decided to go for the surgery," he had said.