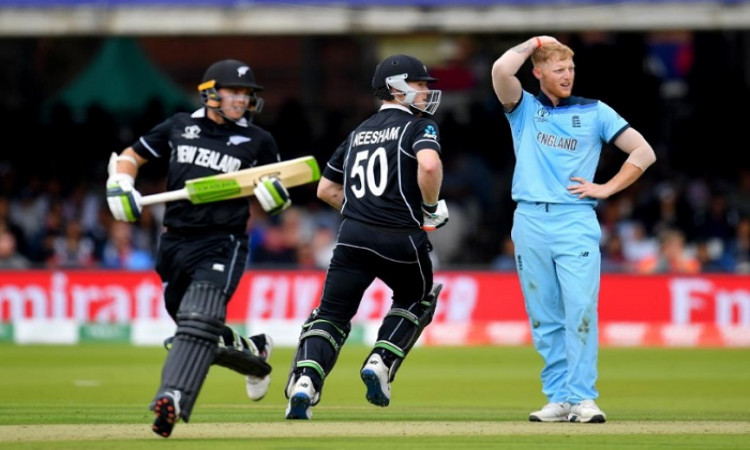 July 14 (CRICKETNMORE) Winning the toss and batting first under overcast conditions on a stage as big as the final of the World Cup requires grit and that is exactly what New Zealand skipper Kane Williamson showed against England at the Lords on Sunday.

While it would be unfair to call the efforts of his batsmen outstanding, a total of 241/8 in the final can always be tricky for the opposition, especially when you have a bowling attack that is known to defend low totals well.

Also Read: Williamson becomes captain with most runs in a single WC

If Henry Nicholls started well at the top with a dogged half-century, Tom Latham made it count at the end with a knock of 47. For England, it was another quality show from Liam Plunkett as he pegged the Kiwis back every time they looked to take the attack to the English bowlers. Plunkett finished with figures of 3/42 from his 10 overs and he was ably supported by Chris Woakes (3/37) and Jofra Archer (1/42).

Earlier, with incessant drizzle delaying the final by 15 minutes, it was a brave decision by Williamson to bat first. And openers Martin Guptill and Nicholls looked to repose the faith shown in them by their skipper as they held fort and looked to play off the new ball. But the partnership was broken in the seventh over when Woakes trapped Martin Guptill (19) plumb in front. While the batsman did go a review, it proved to be a complete waste.

The in-form Williamson joined Nicholls in the middle and it was all about a steady show as the scoreboard read 29/1 as the two looked decently comfortable with the odd delivery moving disconcertingly and causing trouble to the batsmen. They kept rotating the strike by picking the ones and twos before Plunkett struck.

Getting one to move enough after pitching to take the edge of Williamson's bat, Plunkett had the Kiwi skipper caught behind by Jos Buttler. While the onfield umpire -- Kumar Dharmasena -- refused to raise his finger, the Englishmen called for a review and Williamson (30) had to walk back with the score reading 103/2 in the 23rd over.

Nicholls also failed to make much headway after spending quality time in the middle and was dismissed by Plunkett soon after he notched up his fifty. Squeezing in between bat and pad, the ball disturbed the timber as the Englishmen celebrated once again.

New Zealand's semifinal hero Ross Taylor too failed to make it count as he was caught plumb in front by Mark Wood with the score reading 141/4 in the 34th over. Taylor walked back for just 15.

Even as the Kiwi batsmen looked to up the ante, the English bowlers kept striking at the right moments to peg them back. And that was the case when James Neesham looked like he would play a cameo in the middle overs. Just when he started to look in control, Plunkett dismissed him, caught by Joe Root at mid-on.

With the score reading 179/5 after 40 overs, New Zealand needed Tom Latham to stay till the end and guide the innings to a perfect finish. While Latham was dismissed by Woakes in the 49th over, Kiwis still managed to score 62 runs in the last 10 overs.