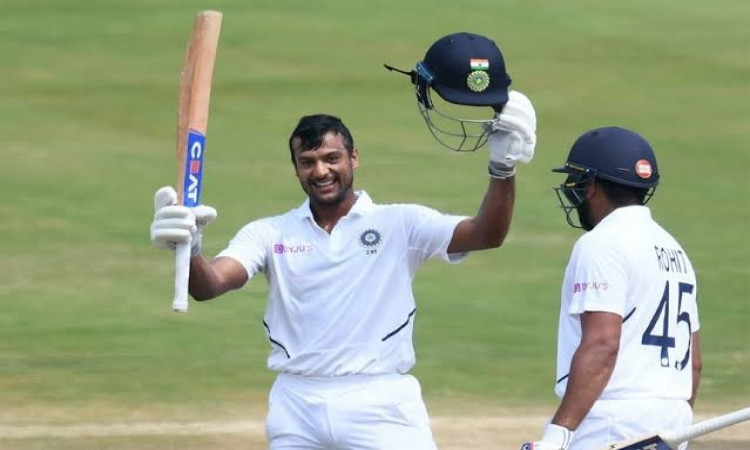 Visakhapatnam, Oct 3: Featuring in just his fifth Test match, Mayank Agarwal on Thursday became the fourth Indian batsman to convert his maiden century into a double hundred and the Karnataka opener is elated over his performance. Mayank was involved in a crucial 317-run opening stand with debutant opener Rohit Sharma and he reckoned if they keep on replicating such feats, it would be tough for any competition.

Mayank played a superb knock of 215 in the first innings of the first Test between India and South Africa here, which contained 23 boundaries and six hits into the stands.

Speaking after the match, a delighted Mayank said: "I am extremely happy. It is a feeling I can't describe. Glad that I could make my maiden hundred into a double. I am happy with the way I played, I am batting well and if we can keep batting together like this upfront, it will be great for the team. If Rohit and me can keep contributing to make 450-500 every time, it will be very tough for the opposition. I would be lying to say that you only have to think about your own game."

"At times you feel that you are playing well and I can take a chance, but that's not how it works. You have to be patient. We had a great partnership to lay the foundation and get to 300 runs," he added.

Mayank also praised Rohit's 176-run knock as the Mumbai right-hander silenced all his critics who had questioned his role as a Test opener. Lauding Rohit, Mayank said: "The way he (Rohit) dominated the spinners was great to see. Initially the pitch did do a bit with the new ball but when the sun came down it got better and better. As we approached lunch on day two, the ball started keeping low. It started spinning by tea and it is great signs for us."

After India declared their innings at 502 runs, the pitch at the ACA-VDCA Stadium started taking turn and the duo of R. Ashwin and Ravindra Jadeja showed signs of what the South African batsmen can expect in the remainder of the first Test as the duo had the Proteas batsmen huffing and puffing in the third session of the second day's play. While Ashwin finished with two wickets, Jadeja''s figure read 1/21.

Mayank also acknowledged the spin duo's role in the contest and said: "They (Ashwin and Jadeja) have been bowling in great areas, kept pressure and bowled great lines. But definitely the wicket has changed and if it plays like it is playing now, they will get a lot of purchase."

At stumps, South Africa's scorecard read 39/3 with Dean Elgar and Temba Bavuma batting on 27 and 2 runs respectively and the visitors still trailing by 463 runs.