'Feels Nice When The Flick Off The Wrists Shot Comes Off In A Match'; Says KL Rahul

On Sunday, against the Proteas at Guwahati, Rahul was in his free-flowing zone from the word go, placing a back-foot punch on a length ball from Kagiso Rabada between backward point and cover for four. 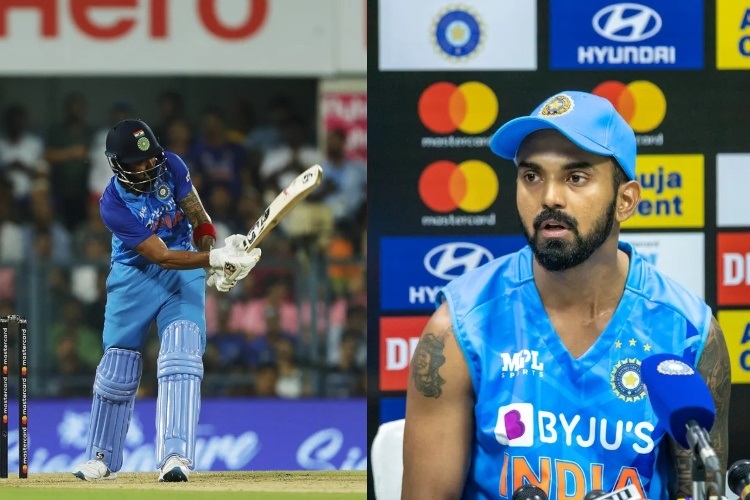 There's no denying that K.L Rahul has taken a bit of time in finding his groove in T20Is since coming back from a long injury layoff in the 2022 Asia Cup in the UAE. Then, he showed glimpses of coming back to his best against Australia before battling hard for a slow fifty against South Africa in Thiruvananthapuram.

On Sunday, against the Proteas at Guwahati, Rahul was in his free-flowing zone from the word go, placing a back-foot punch on a length ball from Kagiso Rabada between backward point and cover for four.

His attacking display grew when he whipped sixes off his wrists twice on the balls coming to his pads twice off Wayne Parnell and Anrich Nortje in his eye-pleasing 57 of 28 balls, laced with five fours and four sixes in India's 16-run series clinching win.

"There is a certain gift that all of us have gotten since birth and that is why we are all playing for the country. We have gotten this far as we have certain things naturally. We obviously train really, really hard. That shot (flick off the wrists) is something that I have practised quite a lot and it feels nice when it comes off in the game," said Rahul in the post-match press conference.

Asked further about the flick being a shot based on instinct, Rahul replied in the affirmative. "It is (on the shot being instinctive). In T20 cricket you have to try to hit sixes and get yourself in positions where you can hit sixes, I try to do that and react to the ball. When bowlers are bowling at 145 km/h there's not much time to see the ball and react. It is instinct, practice and a lot of hard work over the years."

In the last couple of years, Rahul had copped a lot of criticism for his low strike rate in T20 cricket. But Sunday's knock against South Africa put all of that on the back burner, with him batting at a strike rate of 203. Rahul attributed this whopping strike rate to the demand of the situation in the match.

"Yes, that (going at a higher strike rate) was a demand of this innings. When you are batting first you obviously want to give yourself a couple of overs to try to assess the conditions and to see what are the shots that you can play, you talk to your partner."

"You sort of give yourself a target as to this might be a par total on this pitch and then you try and play according to that. We've always tried to be more aggressive, take a lot of risks and that was what was needed from me. I was happy with what came off in the match."

Rahul was a member of India's batting clicking in unison to make a mammoth 237/3, and continuing the ultra-attacking approach that the side has adopted after exiting last year's World Cup in the UAE at the Super 12 stage.

"That effort has been there for the last 10-12 months since the last World Cup, that (scoring big runs batting first) is something that we have consciously tried to get better at as a team. We've done it whenever we've gotten opportunities, that's something we took back and that was our learning. So, we have been doing that and have done it quite a lot of times," concluded the right-hander.