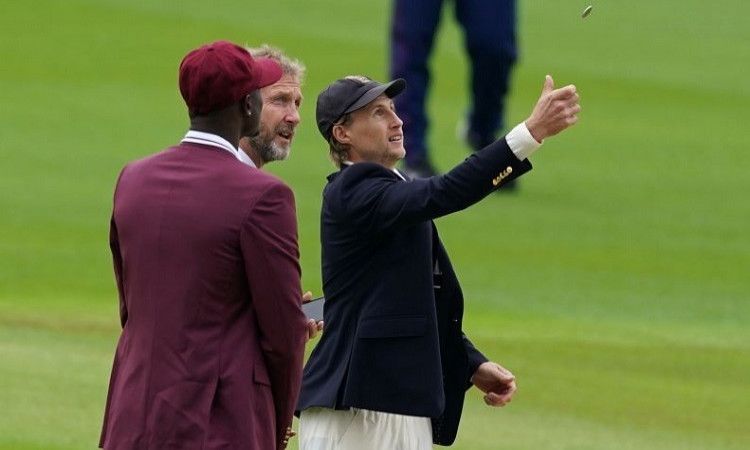 Manchester, July 23: The equation for the third and final Test of the ongoing three-match series at the Old Trafford starting Friday is simple -- hosts England need a win to clinch the Wisden Trophy while West Indies need just a draw to retain the title.

Jason Holder's troops had famously beaten England during the two teams' last meeting in the Caribbean Islands, so they will get to keep the trophy it they manage to eke out a positive result from the final Test.

However, things aren't going to be easy for the visitors as momentum is on England's side following their 113-run victory in the second Test. The hosts will also be boosted by the return of fast-bowler Jofra Archer, who was axed for the second Test for breaking bio-secure bubble protocols.

"Jofra Archer has been bowling seriously well in the nets, with pace and accuracy, and it's great to have him back with the squad," England batsman Ollie Pope wrote in his column for Sky Sports.

Stuart Broad was left out of the first Test and he did exceedingly well in the second while James Anderson looked in good form in the series opener but had to sit on the bench for the second match. Then there are the likes of Mark Wood, Chris Woakes, Sam Curran and also the returning Archer.

But the one certainty in the England team will be Ben Stokes, who has given a great account of his all-round abilities in the series thus far. He single-handedly brought his team back into the series following their four-wicket defeat at the Ageas Bowl.

"I saw Joe (Root) say the other day that we're in the presence of greatness, and he's spot on," Anderson was quoted as saying by Sky Sports.

"After a week in which he's done pretty much everything - he was chasing balls off his own bowling and batting most of the two innings that we did bat and getting wickets as well - it can take its toll so we've got to look after him and make sure we can keep getting the best out of him for as long as possible," he added.

As for the West Indies, they need to find a solution for their misfiring star batsman Shai Hope. Legendary fast-bowler Curtly Ambrose has said that West Indies run the risk of damaging Hope if they continue to play him despite him being clearly out-of-sorts in the series. In four innings, he has scores 16, 9, 25 and 7 to his name.

However, skipper Holder feels there remains plenty of positives for them that could help them seal the series in Manchester.

"There were lot of positives for us in defeat. The way Jermaine Blackwood followed up the first Test; Kraigg Brathwaite continues to be a bright spark; Shamarh Brooks has come into his own and Roston Chase is slowly but surely becoming a frontline off-spinner, maybe not to the rest of the world but certainly to us," Holder wrote in his column for Daily Mail.

"He was outstanding with the ball in the first innings and backed it up with a half century. Shannon Gabriel still looked threatening and Kemar Roach finally found success after bowling so well in the first two games. The team dynamic and spirit were very good too," he added.