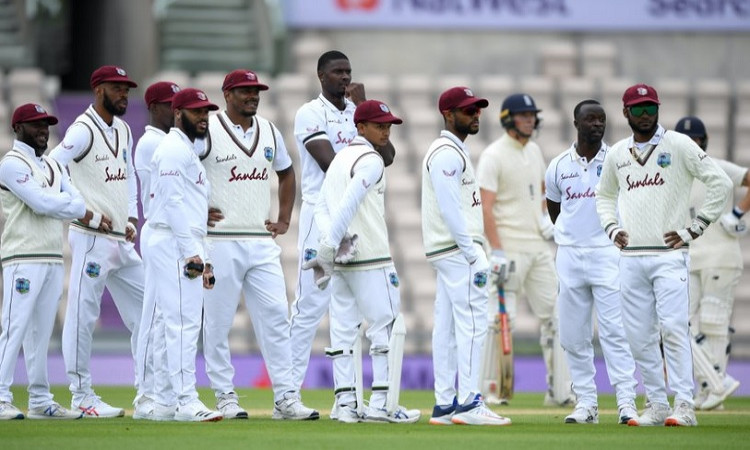 Southampton, July 12: Jermaine Blackwood and Shannon Gabriel starred with bat and ball respectively as the West Indies beat England by four wickets to take a 1-0 lead in the three-match series, on Day 5 of the absorbing first Test at the Ageas Bowl on Sunday.

It was poetic justice as skipper Jason Holder remained at the crease after his stellar show with the ball where he grabbed a six-for in the first innings to set the tone for the tourists.

Also Read: Dada came to our dressing room..told him not to worry: Kumar Sangakkara

Gabriel, who was bumped into the main Test squad after being in the reserves due to his ankle injury, returned figures of 4/62 and 5/75 with his second innings spell wreaking havoc in the England ranks.

The fifth day though belonged to Blackwood (95 off 154 balls; 12x4) who first negotiated the barrage of bouncers well and also kept a cool head on his shoulders to emerge as the unlikely hero.

Chasing 200 for victory, the Windies were 27/3 at one stage before Roston Chase (37 off 88b; 1x4) and Blackwood shared a match-winning 73-run stand for the fifth wicket to steady the ship and set them on course for a famous win which took place in front of empty stands but touched the high notes worldwide as cricket aficionados lapped up the action from their living rooms.

England captain Ben Stokes (2/39) tried hard to weave magic in the end by removing Blackwood who could not reach his century but Holder (14 not out) and John Campbell -- who earlier retired hurt -- remained not out on 8 to see the team through.

Jofra Archer (3/45) spoiled Chase and Blackwood's impressive fightback with a late wicket just before tea after shaving off Windies' top-order but England had little going their way in the third session with their three dropped chances and one run out miss coming to haunt them.

Archer bowled a perfect bouncer to get Chase caught behind by wicketkeeper Jos Buttler.

Minutes later, Shane Dowrich (20) survived another nasty Archer bouncer which hit his chest and was taken at first slip only for reviews to show there was no bat involved.

Archer, who remained wicketless in the first innings and drew some flak with veteran Stuart Broad not getting picked in the XI, bounced back in style.

Earlier in the day, England resumed their second innings on 284/8 and could add 29 runs more as they were bundled out for 313. Shannon Gabriel started from where he had left off on Day 4 as he removed both overnight batters Wood and Archer.

During the chase, the visitors looked nothing like the way they batted in their first essay as the top three collapsed in quick succession after opener John Campbell hit his foot with the bat trying to defend a Archer toe-crusher and had to retire hurt. Much of it was due to the way English bowlers bowled in the right areas and with venom.