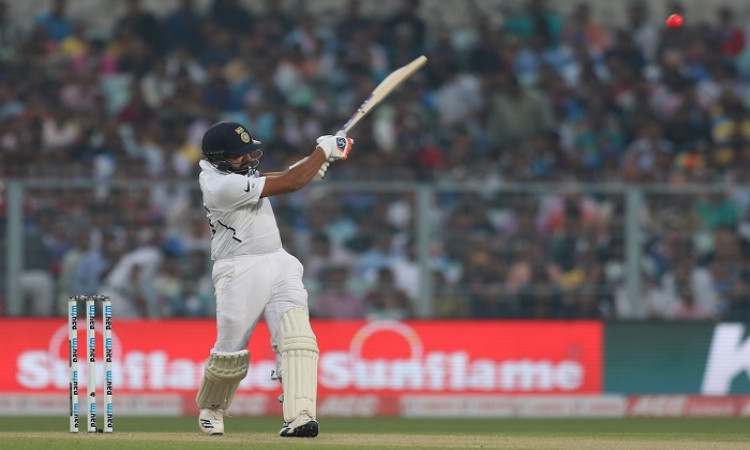 Kolkata, Nov 22: Ishant Sharma took five wickets to lead the pacers' show as Bangladesh were shot out for 106 before the hosts reached 35/1 at dinner break on Day 1 of the first Day-Night Test in the country at the Eden Gardens here on Friday.

Opener Rohit Sharma, who was dropped on 12 by Al Amin Hossain off Abu Jayed, was batting on 13 with Cheteshwar Pujara who was unbeaten on 7.

Mayank Agarwal, who scored a career best 243 in the first Test, was caught at gully by Mehidy Hasan off Al Amin.

To make matters worse for Bangladesh, wicketkeeper-batsman Liton Das and Nayeem Hasan, playing his first match of the series, picked up knocks on their helmets and had to be replaced with Mehidy and Taijul Islam, respectively, as concussion substitutes.

Earlier, Ishant returned figures of 5/22 as he flattened the tail in no time after Umesh Yadav grabbed three wickets in the beginning as Indian pacers toyed with Bangladesh batters to leave them tottering at 73/6 at Tea.

Liton retired hurt for 24 after he was hit on the helmet by a Mohammed Shami (2/36) delivery when he was batting on 15.

The first ball in the historic Test saw Shadman Islam work Ishant down the midwicket for no run. Imrul Kayes scored the first run as he tucked Umesh away to fine leg for a single in the second over.

Shadman, who looked compact, hit two back-to-back boundaries off Umesh in the fourth over as the bowler stayed back of a length.

Ishant drew the first blood for the hosts, trapping Kayes (4) in front two balls after a caught behind appeal was turned down as reviews showed the ball missed the bat on its way to the wicketkeeper.

In the space of the next eight overs, the visitors lost four wickets as the ruthless Indian pace battery fired in unison.

Umesh snared two wickets in the space of three deliveries to remove visiting skipper Mominul Haque and Mohammad Mithun for a pair of ducks.

While Rohit Sharma took a brilliant one-handed catch diving low from second slip across Virat Kohli to send Mominul back, Mithun was castled by Umesh. In the next over, Mushfiqur Rahim (0) chopped a fast Shami delivery on to his stumps.

Bangladesh batsmen simply had no answer to the questions posed by the Indian fast bowlers.

Shadman, who fought well for his 29 off 52 balls, was caught behind off Umesh with Bangladesh reeling at 38/5.

Mahmudullah and stumper Liton Das tried to forge a partnership, but an outstanding catch by Wriddhiman Saha behind the stumps off Ishant sent the former back in the hut as Bangladesh huffed and puffed to the Tea break.

Liton retired hurt just before Tea as Mehidy Hasan replaced him as concussion substitute. Nayeem also picked up a similar blow on the head just after the break and had to leave the field with Taijul replacing him.

Meanwhile, it took little time for the pacers to get the remaining wickets.

Ishant clean bowled Ebadat Hossain (1) and Nayeem Hasan (19), also taking the wicket of Mehidy in between. Shami completed the formalities as Abu Jayed (0) was caught by Pujara at first slip.