Dhoni gives me space to discover myself and isn't pushy: Kohli

July 8 (CRICKETNMORE) Despite all talks of how M.S. Dhoni could be donning the national colours for the last time in this edition of the World Cup in England and Wales, India skipper Virat Kohli has once again said that it was important to appreciate what the former skipper did, not just for the team, but also what he has continued to do in helping Kohli take over as the captain and lead the team. 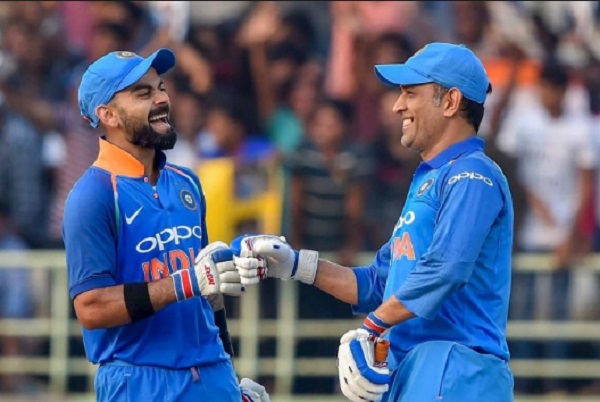 Speaking on the eve of the semi-final against New Zealand at the Old Trafford on Monday, Kohli said that Dhoni has been an integral part of the process of transition of this team and is even now open to helping Kohli with suggestions when it comes to strategising and planning for games.

"I'm sure everyone, if you asked them about him, they have special things to say. And especially for us who started our careers under him. For us that doesn't change. The respect will always be there because of the opportunities that he gave us and the faith that he showed in us and the way he's handled the whole team in transition over so many years.

"And now we are the ones who are taking Indian cricket forward. We understand the importance of that process. So I'm glad you asked about MS, the personality, because a lot has been in focus otherwise.

"So yeah, from that point of view, we are all very grateful for what he's done for Indian cricket and for us. And he's always been in a very happy, jovial mood all the time whenever we see him and yesterday again was a very happy moment for him, for the whole team, to see a smile on his face and he's in a very comfortable, very happy space at the moment.

"I'm not thinking of anything apart from that because the main focus right now is to do what we need to do tomorrow and then on to another one hopefully and yeah, just have a good World Cup.

"But from the respect point of view for MS, it's always going to be sky-high, especially in my eyes, because I know how difficult it can be to make a transition of captaining also, you know, within the same team, just playing as a player after being captain for so many years and still not being too assertive or too pushy in anything. He gives you space to make your own decisions and to actually discover yourself, so I think that's been his biggest quality.

"At the same time, I go ask him anything, he's there giving me advice and he's never shying away from that. So yeah, he's been outstanding and I'm delighted that I have been able to play for so many years alongside him," Kohli explained.

Interestingly, 'under scanner' Dhoni is fourth on the list of run-getters for India in this tournament with 223 runs.