Perth (Australia), Dec 13:  Bowlers dominated Day 2 of the first Test between Australia and New Zealand at the Perth Stadium. Ross Taylor's resilience has given the visitors hopes of not having to follow-on, but Australia are firmly in the driver's seat in the Test having blown away the Kiwi top-order in the final session. New Zealand ended the day on 109/5, trailing Australia by 307 runs. 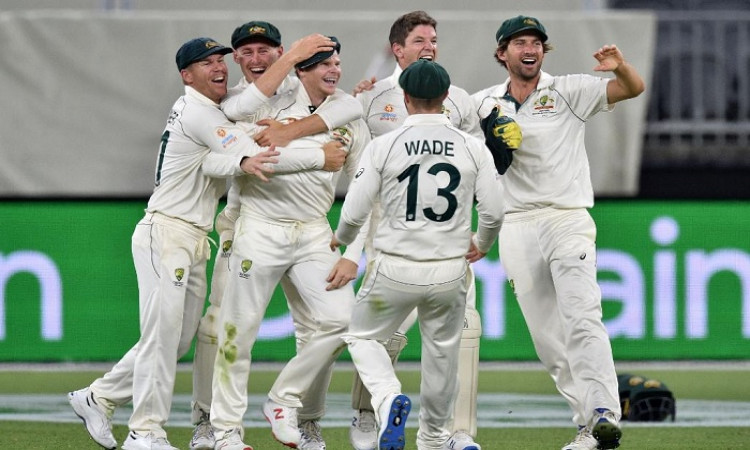 Australia were all out for 416 earlier in the day and Mitchell Starc started the rampage with the wicket of Tom Latham in the very first over of the innings. Hazlewood then castled Jeet Raval with a searing inswinger that went straight through the gates.

New Zealand captain Kane Williamson and Ross Taylor then held on in what was treachorous conditions for the batsmen. Hazlewood pulled up short while bowling the third ball of the fourth over and walked off. His participation for the day ended with that incident.

Cummins and Starc steamed in on the two batsmen with Matthew Wade bowling two overs in between before Nathan Lyon was brought into the attack. New Zealand did not lose a wicket until the 23rd over in which Williamson fell to Starc largely thanks to a stunning catch at second slip by Steve Smith.

Henry Nicholls replaced his captain and survived for five overs before becoming Starc's third wicket. Neil Wagner, sent in as nightwatchman, was dismissed the very next ball. Starc didn't get his hat-trick and Taylor, who scored a fifty, ended the day with a four towards mid-on.

Earlier, Australia started the day on an overnight total of 248/4 with centurion Marnus Labuschagne and Travis Head at the crease. It was Labuschagne who fell first after adding 33 runs to his total. Neil Wagner bowled an inswinger from round the wicket that castled him and Labuschagne walked with 143 off 240 balls to his name.

Head went on to score a fifty in the 110th over and fell two overs later to Tim Southee, going for a wide ball outside off with a drive that was caught at cover.

Captain Tim Paine and Pat Cummins then held fort into the next session and it was Jeet Raval who got the latter out after he had absorbeed 84 balls. Paine batted on with the tail and was the last man to be dismissed as the Australian innings wrapped up for 416.