Sydney, Feb 10:  David Warner and Ellyse Perry won the Allan Border Medal and Belinda Clark Medal respectively, making it the third such win for each at the Australian Cricket Awards on Monday. 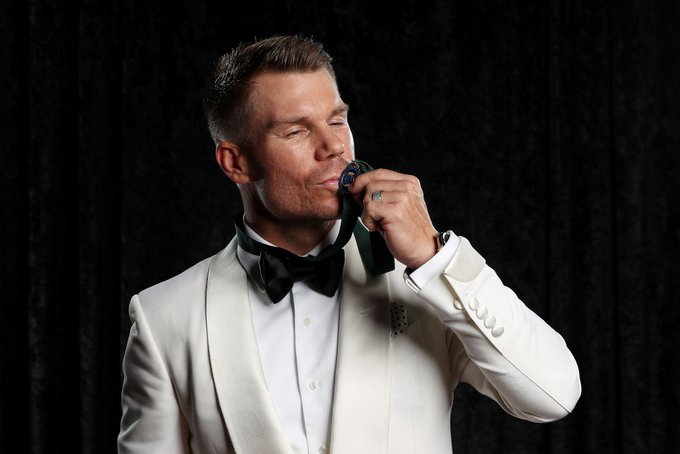 The Belinda Clark Medal and Allan Border Medal are awarded to the players from the Women's and Men's side respectively, voted on by players, umpires and media from across all international cricket, it read on www.icc-cricket.com.

Warner had a superb campaign during the World Cup in 2019, scoring 647 runs across the tournament, second only to Rohit Sharma's 648, as well as smashing the highest individual innings of the tournament - a mammoth 147-ball 166 against Bangladesh during the group stage.

He then struck the second-highest ever Test score by an Australian, carting 335* in 418 balls against Pakistan in Adelaide.

Perry had a bumper year too, starring frequently with both bat and ball. She was a central figure in Australia's dominant Ashes performance - the visitors claiming the multi-format series 12-4.

Perry lit up the only Test of the series, played in Taunton, with a brilliant 116, and also took record figures of 7/22 in the Canterbury ODI. In all, she finished the series with 378 runs and 15 wickets, topping both charts across both teams.

She also put in strong performances in the West Indies and at home against Sri Lanka.

Breakout batting sensation Labuschagne took the honour of Men's Test Player of the Year, after an incredible run of form in which he has scored 1249 runs in 15 innings, starting when he came in as a concussion substitute during the Ashes for Steve Smith.

Wicket-keeper Healy won Women's ODI and T20I Player of the Year after scoring more than 1000 runs across the two formats in 2019, including a record 148* in a T20I against Sri Lanka in Sydney.