During his short stint with the Barbados Royals, his first ever in the league, the 29-year-old has 221 runs to his name in 6 matches, scoring at a strike rate of over 131. 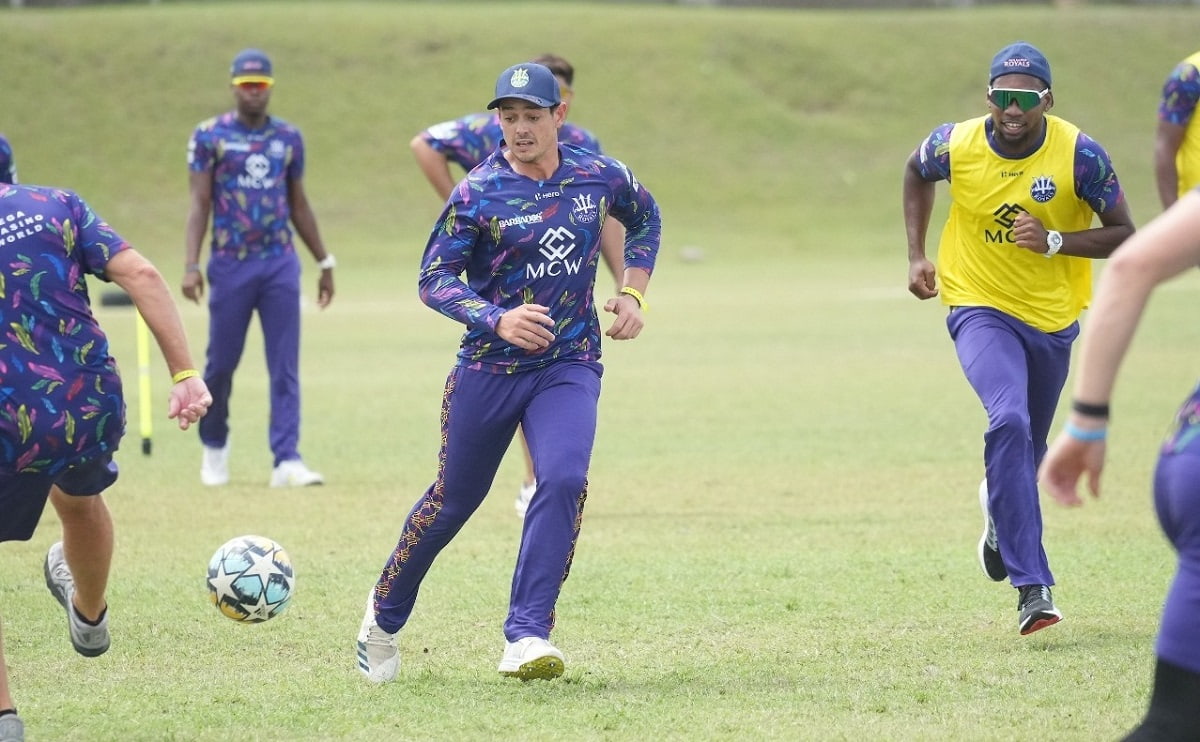 During his short stint with the Barbados Royals, his first ever in the league, the 29-year-old has 221 runs to his name in 6 matches, scoring at a strike rate of over 131.

His first-ever taste of life in the CPL, and de Kock says he has loved every bit of it.

Speaking ahead of Sunday's encounter with Guyana Amazon Warriors, he said, "It has been a great experience. Coming to the CPL for the first time was a new challenge for me. However, the moment I walked in here, I was greeted by smiles throughout by the team and our extended staff members. It has to be one of the better team environments I've ever been in, and to say it's my first time in the CPL, makes it even better."

With six wins in seven games, the Royals sit on the top of the table with 12 points, and the environment within the team could be one of the factors behind the successful run.

"I think the best part is that we are winning matches and are also enjoying off the field. I've obviously played with certain people before but making new connections here within the team has been amazing."

Talking about the CPL and what he's made of the experience that the league provides to a player, Quinton said, "I think this is one of the great ones. It is so much fun. I had never played here before but had always heard great things about the whole experience.

"It's one of those tournaments where you will never know until you come in and see for yourself. The quality of cricket on offer has been great, and you can see that by the number of talented upcoming players from the Caribbean who are performing now," he said.

The Barbados Royals were handed their first defeat of the season on Wednesday in a rain-affected match, but the Royals Sports Group-owned franchise will be aiming to secure their spot in the playoffs with a win over Guyana Amazon Warriors in their next game and that is something that is on de Kock's mind.

"With the team that we have, you can see everyone has stepped up and performed - whether that is the experienced players or the younger ones. We want to make sure we can perform well in the next few matches and get that playoff spot secured before reporting to the national team, and I'm very confident the boys can take it from there and bring the cup home."

With Barbados providing him the first experience of being a Royal, the wicketkeeper-batter is keen on the link-up.

"It has been so much fun. It's like another level of how much I'm enjoying my cricket at the moment, both on and off the field. I've also really enjoyed the company here, with guys like Dappa (Kyle Mayers), Big Jimbo (Rahkeem Cornwall), and Jason (Holder). There are just so many characters and everybody brings a different energy to the group. I don't think there's been a day where my cheeks haven't had a cramp from laughing too much," he said.

Having captained South Africa, de Kock was asked if he was helping his compatriot David Miller with some insights.

"We obviously have a leadership group here at the Royals. Jason, Kyle and myself, we do input into Dave (Miller). I think we all just surround him and help to make sure he's finding the solutions which help the team. I think it comes very naturally to him, and he's been doing a great job. His attitude is right up there and he's always concerned for his players both on and off the field, which is a quality of a great leader."

A new facet to de Kock's game in the CPL has been his batting position, with the man from Johannesburg batting at 3 or 4.

"When I came into the team, I saw Rahkeem and Kyle being the openers, so I was prepared to bat down the order. It is something that I've done in the past at the beginning of my career, and I'm happy to do so again for the team," he signed off.