The Barbados Royals picked up an eight-wicket victory in their final match of the 2021 CPL. 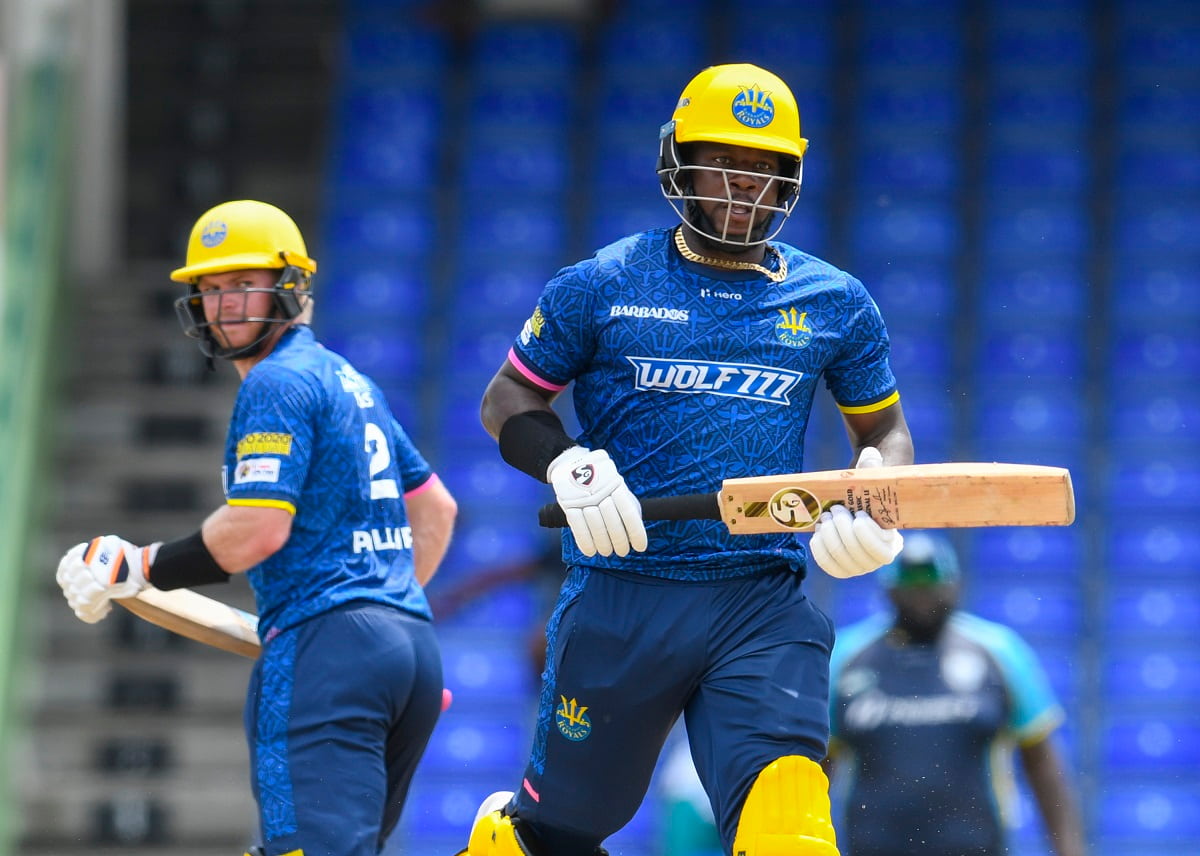 It wasn’t to be a victorious Sunday for the Saint Lucia Kings in the Caribbean Premier League(CPL) 2021, as the Barbados Royals claimed an eight-wicket victory in their final game at the Warner Park Stadium. The defeat leaves the Kings’ fate out of their hands, as they now require a favour from the Guyana Amazon Warriors to get themselves into those semi-finals spots.

The Kings were without captain Faf Du Plessis for this game who had to sit out due to a groin strain, with Rahkeem Cornwall getting a chance instead. And the 28-year-old looked to make the most of that opportunity, as he picked up a six and a four within the first three overs.

Andre Fletcher at the other end also got into the groove early, as he picked up a six in the very first over off Oshane Thomas. He followed that up with a four and a six off the same bowler to get his team up and running. The Kings openers continued to pile on the runs, as they scored three boundaries amongst them off Raymon Reifer’s first over to push the score to 43 after five.

Cornwall picked up another six over long off and a four through cover point off Joshua Bishop’s bowling in the final over of the powerplay. The Kings all-rounder added another maximum in the next over as well, but holed out to long-off when he tried the big shot next time against Kyle Mayers.

The wicket ensured the next couple of overs passed by quietly, but Fletcher once again picked up the pace in Hayden Walsh Jr’s second over, getting two more fours as the team total climbed to 81/1 after ten. New man Roston Chase also joined in, targeting the medium pace of Mayers to plunder 13 runs off it.

The Kings though lost their second wicket in the 12th over, as Fletcher was run out trying to steal a quick single on the off-side. That got David Wiese to the crease, and the Namibian International got a couple of fours early in his innings. Chase at the other end was also picking the gaps for fun as the Kings augmented their score to 139/2 after 16 overs.

The 29-year-old got to his fourth fifty of the season in the next over, hammering Reifers over deep mid-wicket for a maximum. The breakthrough finally came in the 18th over for the Royals, as Wiese chipped one straight to the deep mid-wicket fielder when Thomas returned to bowl. The Royals pacer managed to dismiss Chase as well in the same over, leaving the batting side at 160/4 with two to go.

The wicket however did more harm than good for the Royals, as new players Tim David and Keemo Paul went berserk in the final few deliveries as they hammered four sixes amongst them. The Kings added 51 runs in the final four overs as they finished with a powerful total of 190/6.

In reply, the Royals needed a strong start and Kyle Mayers did exactly that, getting three boundaries off four balls against Alzarri Joseph. His partner Johnson Charles also picked up a six early in the innings, as the chasing side raced to 28/0 after three overs.

Roston Chase however proved to be the golden arm once again for the Kings, as he induced Charles into playing a rash shot which went straight into the hands of the covers fielder. A couple of balls later, new man Shai Hope was run out without facing a ball as Chase started his spell with a double wicket maiden.

The Kings all-rounder however was punished in his second over, as Mayers and new man Glenn Philips picked up two sixes and a four amongst them to bump the scoreboard to 60/2 after eight.

The Royals batters continued to pile on the runs, as they took on David Wiese to exploit 28 runs off his first two overs, as the team score got to 91 after 12. That was followed up by another expensive over, as Mark Deyal was hit for 18 runs. Mayers got to his fifty shortly after with a straight six over the bowler, as the Royals team total climbed to 120/2 after 13.

There was no respite for the Kings as Chase also proved expensive when reintroduced into the attack, as the Royals got the asking rate to below nine an over. Philips too got to his fifty shortly after as the partnership between the two got past 100.

Mayers picked up his sixth six of the innings in Wiese’s penultimate over, bringing the equation down to 26 off the final three overs. Wahab Riaz however delivered an economical 18th over, conceding just seven runs to make for an interesting finish.

Philips however titled the scales back in the favour of the Royals, as he picked up a three sixes in the first four eliveries of Joseph’s final over to level the scores. The Kiwi batters then calmly patted one towards the outfield to take his team over the line with an over to spare.