Trinidad, Aug 18:  Hosts Trinbago Knight Riders may have the home advantage, but that will be a recurring feature this season at the Caribbean Premier League, as all matches are to be played in Trinidad amid the COVID-19 pandemic. 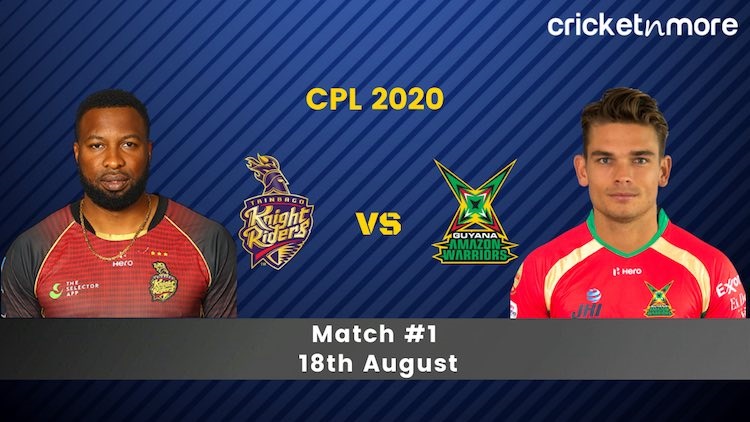 In the first match of this year's edition, TKR will take on Guyana Amazon Warriors.

TKR have some of the biggest names of the CPL and they have included a starcast of skipper Kieron Pollard, Dwayne Bravo, Sunil Narine and Colin Munro. Pollard is one of the biggest hitters in the game and the others have great T20 experience.

Narine has been a match-winner in the past but has not been in action since last October, when he had a finger injury – he played despite that in the closing stages of CPL 2019. He also missed the tour of the sub-continent. But in spin-friendly conditions in Trinidad, he could be a handful for most oppositions.

Some of the other key players include Fawad Ahmed, Lendl Simmons, Khary Pierre, Tim Seifert and Sikandar Raza. And, then there is the lone Indian in the tournament - the 48-year-old leggie Pravin Tambe.

On the other hand, Amazon Warriors, runners-up last season, had a brilliant league record of 10-on-10 last year but lost to Barbados Tridents in the final. Their star player was Brandon King who totalled 496 runs from 12 matches and was the top scorer and it included a best of unbeaten 132. Since then King has found a place in the West indies national team, too.

Warriors have a very exciting prospect in 23-year-old Shimron Hetmyer, who actually pulled out of the Tour of England due to COVID-19 concerns. In IPL 2019, he played for Royal Challengers, though not as often as he would have liked to. He could be the man to tackle the spinning tracks of Trinidad.

In the second match of the day, defending champions Barbados Tridents will lock horns with St Kitts and Nevis Patriots.

Tridents, led by Chris Green, will have the services of star players like Rashid Khan, Jason Holder and Corey Anderson, besides Johnson Charles, the top scorer for Tridents last season with 415 runs from 13 matches. With Anderson and Shai Hope, he will be the mainstay of the batting, though they have excellent all-rounders in Jason Holder, Mitchell Santner and teenaged star Nyeem Young. The bowling star could be Afghanistan's spinning star Rashid Khan.