St Lucia Zouks registered a thrilling 3-run victory over Barbados Tridents in the nineteenth match of the Caribbean Premier League 2020 on Sunday. St Lucia Zouks smashed the record for the lowest total ever defended in CPL, as Kesrick Williams and the spinners strangled an anxious Barbados Tridents batting lineup to leave Jason Holder’s men reeling. 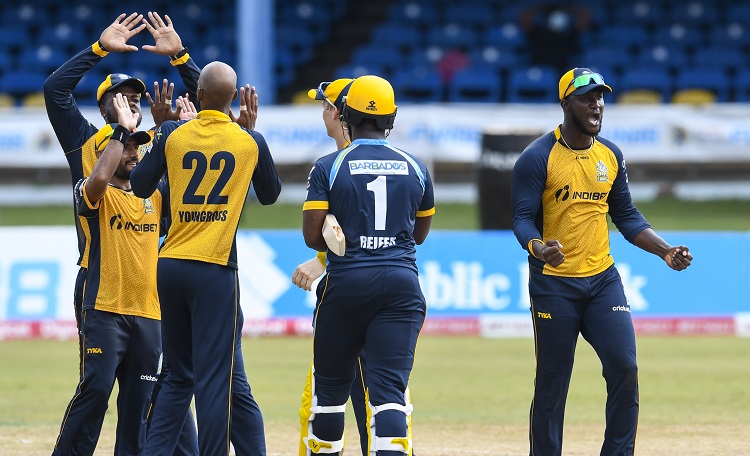 Joshua Bishop came in for his second senior T20 game, replacing the injured Mitchell Santner, and just as he had in his first match, last year against the same opposition, he dismissed Rakheem Cornwall in the first over. Andre Fletcher’s innings was dramatic but brief - he smashed Holder for six first ball, but the Tridents captain trapped him LBW second - and after eight balls the Zouks were 12/2.

Bishop bowled an impressive second over, beating both Leniko Boucher and Roston Chase and having Chase dropped at point. Holder showed faith in Walsh after his mauling at the hands of Kieron Pollard yesterday, and Walsh should have dismissed Boucher but Shai Hope missed a simple stumping. Rashid Khan was as accurate as ever, and the Zouks reached the Powerplay at 35/2.

Boucher was frenetic before Walsh bowled him with a quicker ball. Chase was able to free his arms and sweep Ashley Nurse for four, but Walsh was visibly growing in confidence and beat Chase in the flight with a slower googly to bowl him. Nurse continued, Rashid again held back for the second part of the innings, and the Afghan pair went boundary-less. The Zouks reached halfway at 58/4.

Nabi for once failed, skying a flighted Walsh googly to the captain at long-off, and with him gone Rashid returned and troubled both Najibullah Zadran and captain Daren Sammy. Bishop’s return over was also accurate, and a frantic Sammy ran himself out to leave his team 65/6 in the 13th. Javelle Glen though started in style with a gigantic  Maximum that landed on the roof.

Najibullah late-cut Rashid with just enough pace to find the boundary, but the rest of the over went scoreless. Nurse got a third over with two left-handers at the crease and picked up Glen, albeit it was a full toss whipped straight to Walsh at deep midwicket.

Holder went to his seamers Nyeem Young and Raymon Reifer, and a restless Najibullah fell to the latter thanks to a good low catch by Joshua Bishop at deep square leg. Reifer got a second thanks to Walsh expertly judging a mistimed Scott Kuggeleijn pull to juggle and hold near the rope.

Rashid was, predictably, too good for the tail and finished his spell with the wicket of his countryman Zahir Khan. Young with a tight over of 0/3 was the only one of the Tridents bowlers not to take a wicket, and they hadn’t even needed all 20 overs.

Hope and Johnson Charles started cautiously. The first aerial shot didn’t come until the 4th over, Charles almost holing out to mid-on, but a smattering of fours saw the Tridents score at a run a ball. Hope fell LBW to a good ball from Williams, but the Tridents reached the Powerplay at a steady 34/1.

That became 37/2 when Zahir bowled Kyle Mayers with a beauty that turned from middle to take off-stump, the no.3 again struggling against wrist-spin. Williams and Zahir snuck through a few tight overs, and even Charles’ third boundary was a controlled leg glance. Williams wasn’t giving up, beating Holder’s waft to pick up a second LBW, but at the drinks break the Tridents were 48/3 and needed barely over four an over.

The Tridents though continued to bat nervously - Chase and Glen, the latter bowling for the first time in senior T20 cricket, were tidy, and the leg-spinner Glen got his first wicket when Charles sliced to long-on where Williams took a good catch.

The Tridents suddenly found themselves 67/4 off 14, and Zahir, Nabi and Chase bowled tidily against a nervy Nurse and Corey Anderson. When Nabi beat Anderson in the flight and bowled him, the Tridents found themselves suddenly five down and needing over a run a ball. Sammy gave Glen the nod for the 19th, and Rashid fell clubbing the leg-spinner to Nabi, leaving Chase nine to defend off the last over.

Nurse fell to a good catch from Najibullah, but most importantly Chase started with three dot balls. Reifer missed a full toss and only managed three off two balls, leaving Young needing to hit his first ever ball in  CPL over the ropes to seal a win that seemed a formality at almost every stage. He couldn’t do it, and while the Zouks bowlers deserve huge credit, for the second day in a row the Tridents found themselves wondering how on earth they had lost.

Interview of Player Of The Match - Javelle Glenn

"I am a soldier. I never say die. I always have a fight, and I am always going to fight for myself and fight for the team and fight for my family", Javelle Glenn, St Lucia Zouks (Man Of The Match In The Game Against Barbados Tridents). Check out the Full video #CPL20