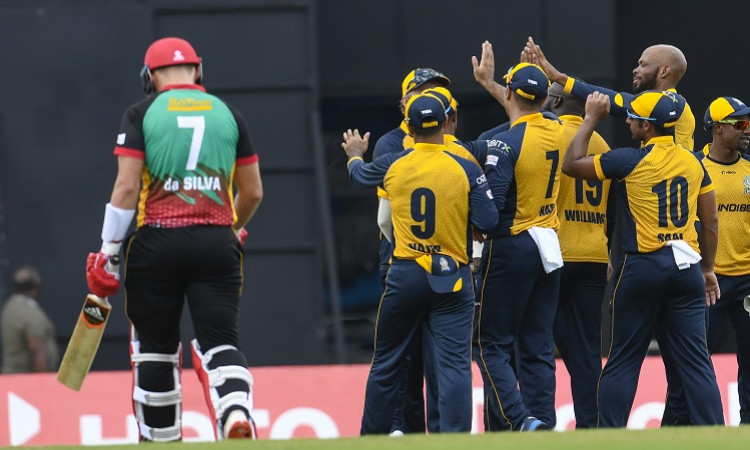 A powerful start and a late acceleration saw St Lucia Zouks overcome a middle-overs slump to post the highest total of  Caribbean Premier League (CPL) so far, and with the off-spinners again excellent that proved too tough an ask for a St Kitts & Nevis Patriots team who’ve now played three, lost three.

Patriots captain Rayad Emrit chose to bowl, but while Sheldon Cottrell and Sohail Tanvir started tightly to Rakheem Cornwall, Andre Fletcher was able to pick up boundaries off both. Cornwall retired ill in the third over, and while Mark Deyal started with a  Maximum first ball, he should have fallen off his third when Ben Dunk missed a slip catch off Jon-Russ Jaggesar. Jaggesar’s frustration grew when Kieran Powell stepped on the rope while trying to complete a juggling catch.

The Zouks were quick to take advantage, Fletcher taking a liking to Tanvir and Deyal, peppering the leg-side off Jaggesar to power the Zouks to 64/0 off the Powerplay. The onslaught continued as the field went back, with Deyal launching his third  Maximum to bring up the 50 stand off just 27 balls.

Ish Sodhi took a good juggling catch at mid-off to dismiss Deyal off Emrit’s first ball. The Patriots captain foxed Najibullah Zadran with an array of slower balls, but the Afghan powered a pair of reverse sweeps off Sodhi and the legspinner was frustrated when Fletcher was dropped again on 38. Another Najibullah four saw the Zouks motor to 91/1 at halfway.

Jaggesar finally got his man when Fletcher picked out deep midwicket. With the Zouks so well set, it was a surprise to see the anchorman Roston Chase come into bat, and he fell to a spitting Jaggesar carrom ball before he could make much of an impression. Tanvir picked up Najibullah and Sammy caught behind in the same over, and at 123/5 in the 15th the Zouks were in danger of wasting a good platform.

Cornwall was well enough to return but hit only one boundary before he was freakishly run out. A Nabi leading edge spun back onto the bowlers’ stumps with Cornwall backing up looking for a run, and Emrit had ample time to complete the run-out.

Nabi showed his class with two huge  Maximums off Tanvir, one of which went literally out of the ground. Another flurry off the 20th took the Zouks to an imposing total despite their mid-innings stutter.

Nabi was back in the action immediately, bowling an excellent first over to Chris Lynn and Evin Lewis. Saad bin Zafar was not so accurate - when he dropped short Lynn pulled, and when he overpitched Lewis drove and paddle-swept - but a stunned Lynn had to depart when Najibullah sprung magnificently to take the catch of the tournament so far.

Lewis toyed with Scott Kuggeleijn, dispatching a  Maximum over square leg and paddling the follow-up slower ball very fine for four. But it was the New Zealander who was waiting at long-on when the recalled Joshua Da Silva toe-ended a straight hit off Chase. Kesrick Williams, bowling a rare Powerplay over, mixed up good and bad and the Patriots ended the Powerplay at 52/2.

Chase continued to impress, the ominous Lewis edging a cut to the keeper off a quicker ball. With Obed McCoy also accurate, Sammy was able to ramp up the pressure on Denesh Ramdin and Ben Dunk, and despite Ramdin’s  Maximum last ball before the drinks, the Patriots needed 9.5 an over off the last 10. Dunk succumbed to the pressure, missing a sweep and giving Chase a 3rd wicket of a fantastic spell. Tight overs from Williams and Nabi pushed the required run rate up above 11, and Powell, Ramdin, Tanvir and Emrit all fell trying to slog Kuggeleijn.

The Patriots’ keeper deserves credit for a good lone hand, and Cottrell launched a few lusty blows to narrow the margin of defeat, but other than their mid-innings batting wobble the Zouks were in control throughout, and with their well-stocked spin attack could be a force later in the tournament if the pitches tire as expected. The Patriots meanwhile have work to do if they’re not to be cut adrift.