Jamaica Tallawahs beat St Lucia Zouks by 5 wickets in the third match of the Caribbean Premier League (CPL) on Wednesday. 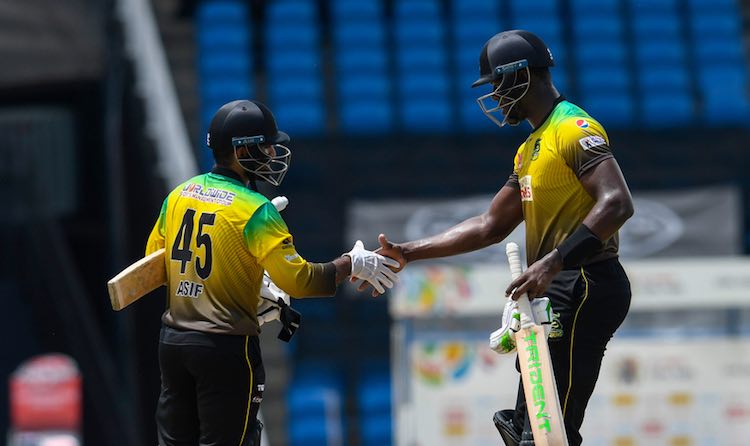 Asif Ali finished the game in style as the Jamaica Tallawahs middle-order put the rest of the Hero Caribbean Premier League (CPL) on notice, recovering from a top-order collapse to make light work of a tricky target against the St Lucia Zouks.

Rakheem Cornwall battered Oshane Thomas for two fours in the game’s first over, and Andre Russell dropped Andre Fletcher on just 4, but captain Rovman Powell made no mistake when Cornwall it to him at cover when the batsman was on 9.

Mark Deyal cut Mujeeb-ur-Rahman for four and lofted Permaul for consecutive Hero Maximums, but Permaul had his revenge, keeper Chadwick Walton taking a neat catch. Fletcher struggled against Mujeeb but sent Permaul into the stands over long-on, and the Zouks closed the GuardianLife Powerplay at 52/2.

Thomas sent down four wides and was pulled for four by Chase, and while Russell’s bouncer was too hot for Fletcher to handle, Chase was quickly onto a hook for his first six. Najibullah Zadran launched Sandeep Lamichhane onto the grass bank, and another boundary from Chase off Russell took the Zouks to 86/3 at halfway.

Lamichhane kept Najibullah quiet with a series of googlies, and while Chase relieved the pressure with a pull off Carlos Brathwaite and a cover drive off Lamichhane, the Nepalese spinner came back beautifully to almost have Chase out twice in two balls.

Big hitters Daren Sammy and Mohammad Nabi were kept waiting as Chase and Najibullah were forced to run hard to keep the scoreboard ticking. Four twos in a row might have taken it out of Najibullah as a flat-bat found only Powell at long-off, the catch held despite a collision with Permaul.

Nabi took Mujeeb for a huge Hero Maximum and a deft four, but his countryman took revenge with a simple return catch. Chase brought up his first ever T20 fifty off 39 balls, but Mujeeb beat him in the flight to give Thomas a simple catch at point.

With Russell accurate at the death, Sammy was forced to risk a tight second run and Powell’s hard throw found him short. Despite the slow finish, the Zouks’ 158/7 was the highest total of Hero CPL 2020 so far.

The Tallawahs struggled early, and a frustrated Walton skied Obed McCoy to Sammy at mid-off. The Zouks used a different bowler for each of the first four overs, and none of them went for even a single boundary. 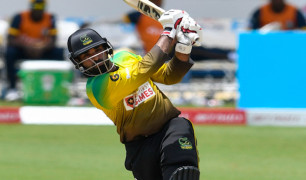 Nicholas Kirton tried to break free, but Deyal pulled off the Republic Bank Classic Catch of the tournament so far, leaping almost behind him to pluck a pull shot from the sky and reduce the Tallawahs to 13/2 in the 5th over.

Powell began the rescue mission off his first two balls, hitting Scott Kuggeleijn for four and then a powerful flat Hero Maximum. Phillips lofted Zahir Khan or a four-and-six pair of his own, but at 36/2 the Tallawahs were behind the game after the Powerplay.

But it was a different story in the middle overs. Phillips meted out brutal treatment to Kesrick Williams, and Powell clubbed a pull followed by a straight six off Zahir. All of a sudden, the Tallawahs were ahead of the required run rate.

Sammy sensed the danger and brought back McCoy, and Phillips had to wait till the last ball of the over for a boundary. Powell tried to take on Cornwall but found only deep midwicket, and at the Angostura LLB drinks break, the Tallawahs were 78/3 needing a further 83, and the game was finely balanced.

But Asif Ali blasted his third ball over the ropes and was unfazed by the loss of Phillips. A four off Nabi kept things ticking, and a free hit and a brutal Russell cut shot meant the 13th over went for double figures. Russell pulled the last ball of the fourth for four and the Tallwahs entered the last six overs needing 50.

The 15th over went boundary-less, and Russell and Asif had to take a chance off Zahir’s last. They responded in style, with Asif dancing down the track for a Hero Maximum and Russell easing a short ball for four.

The Zouks had a chance when a Williams slower ball drew a thin edge from Russell, and thus Brathwaite joined Asif with the required run rate above 9. But an Asif dink and two Brathwaite bludgeons, plus a dropped catch by Sammy, meant Kuggeleijn’s last over went for 16 and the game was as good as won.

The Zouks will feel they left a few runs out there, and Sammy underused himself and Nabi, but today belonged to the Tallawahs’ power-hitters. A good measure of how comfortable they were in the end was, despite Andre Russell scoring at under a run a ball, the game was won with an over to spare.