Can't wait to get back into that dressing room: Cheteshwar Pujara 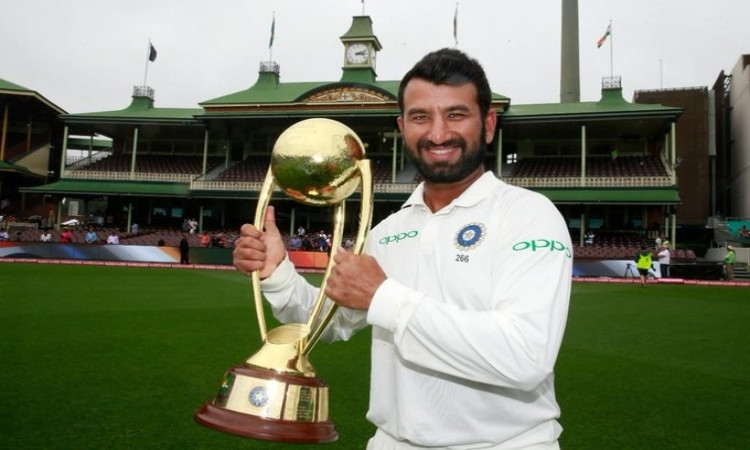 New Delhi, July 2: Cheteshwar Pujara shared a photograph of the Indian Test side celebrating their series win in Australia last year on Thursday and said that he can't wait to get back among the players in the dressing room. Pujara last played for India in their second Test against New Zealand in Christchurch in March.

"Miss hanging out with the guys. Can't wait to get back into that dressing room! #ThrowbackThursday #GoodTimes," said Pujara in his tweet along with the photograph which featured him along with captain Virat Kohli, Mayank Agarwal, KL Rahul, Hardik Pandya, Kuldeep Yadav, Murali Vijay, Ishant Sharma and Jasprit Bumrah. The players are holding the Border-Gavaskar Trophy.

The 2018/19 series was the first time any Asian side managed to beat Australia Down Under in a Test series. Pujara was India's best batsman, finishing as the highest scorer in the series with 521 runs at an average of 74.42. India then went on to win the subsequent ODI series as well to end the tour on a high.

With a shadow of doubt hanging over the T20 World Cup that is scheduled to be held in Australia later in the year, India's next series seems to be a Test series in Australia itself. Cricket Australia earlier confirmed the schedule for the four-match Test series which is set to begin on December 3. The matches will be played at the Gabba, Adelaide Oval, Melbourne Cricket Ground (MCG) and the Sydney Cricket Ground (SCG).

Pujara last played for India in their second Test against New Zealand in Christchurch. This was also incidentally the last match that India played at all with their first ODI match against South Africa at home washed out and the rest of the series being postponed due to the coronavirus pandemic.