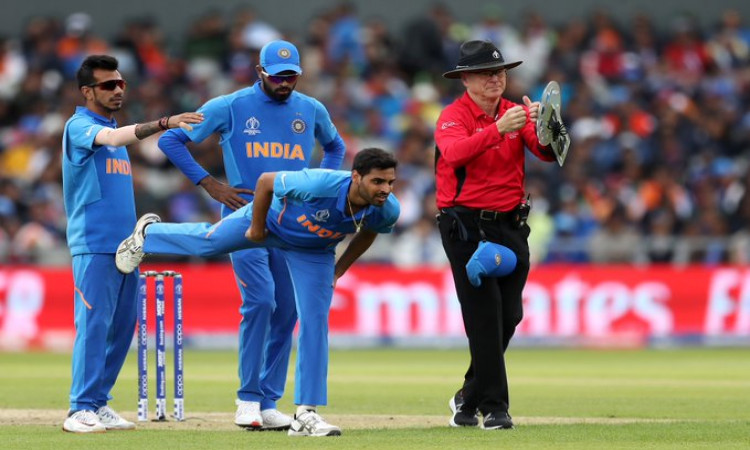 New Delhi, June 25 (CRICKETNMORE) In a big positive for the Indian team management, pacer Bhuvneshwar Kumar bowled for around 30-35 minutes at the indoor nets in Manchester on Tuesday. While it is unclear if he will be in contention for the game against West Indies at Old Trafford on Thursday, the close to full run-up bowling session is an indicator that the hamstring niggle has improved.

Speaking to IANS, sources in the know of developments said that while the pacer did start with a short run-up, there was a gradual increase in the run-up under the watchful eyes of physio Patrick Farhart.

Also Read: This day, that year: When Kapil's Devils conquered the world

"It is indeed a positive sign as he bowled close to 30-35 minutes under Farhart's observation. It started with a small four or five step run-in to the wicket before he kept increasing the run-up at regular intervals. He was also checked on by skipper Virat Kohli during his net session. There was no visible discomfort and that is a good sign," the source said.

Interestingly, Saini was named as one of the stand-by players when the Indian selectors had announced the 15-member squad for the World Cup. The BCCI sent out an official message saying: "Navdeep Saini has arrived in Manchester. Navdeep is the only net bowler here and he will train with the Indian cricket team."

Speaking to IANS, sources in the know of developments said that Saini didn't come to England as a cover like Rishabh Pant. "He has joined as a net bowler and not as anybody's cover like Pant had come in as cover for Shikhar Dhawan."

After the game against Pakistan, skipper Virat Kohli had said: "Slight niggle for Bhuvi, he slipped on one of the footmarks. He's out for two -- maybe three -- games, but he should come back for us at some stage during this tournament. He is very important for us."