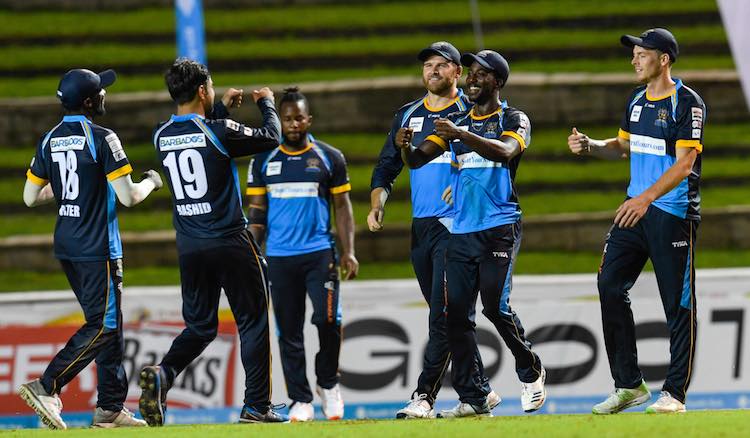 Sheldon Cottrell struck with his fourth ball, bowling Johnson Charles as he tried to whip to leg. He pinged Corey Anderson on the head first ball then had him caught at point by Evin Lewis, and when Hope sliced Tanvir to the same fielder the champions were reeling at 8/3 in the third over. Their response was spectacular.

Kyle Mayers took a Tanvir over for 14, and Jason Holder joined in by effortlessly flicking a Hero Maximum over square leg off Alzarri Joseph. Mayers pulled powerfully for two more sixes of his own, and from a hopeless position the Tridents found themselves 51/3 at the end of the GuardianLife Powerplay.

Holder flicked then drove Ish Sodhi for six, bringing up a 50 partnership off just 25 balls. But the game swung back the Patriots’ way once more in the space of two balls.

First Mayers crashed Emrit to deep cover, then Evin Lewis pulled off a direct hit to send back Jonathan Carter. The Tridents had gone from 8/3 to 69/3 to 69/5 as the game continued to move at a breathless pace. Raymon Reifer picked out a lone boundary fielder off Emrit, and Ben Dunk then held a beauty off Sodhi to dismiss the well-set Holder, but here the Tridents’ deep batting lineup came into its own

Ashley Nurse swung Joseph straight to Lynn, but Rashid Khan had jaws hitting floors with an astonishing helicopter flick for six. Santner fell timing a ball sweetly but straight to the fielder to leave Rashid batting with the capable Hayden Walsh Jr at no.11.

Tanvir and Cottrell were just as impressive at the death as at the top, going for just seven off their combined fourth overs, but Rashid showed his power and craft to plunder a couple of late boundaries to drag the Tridents over 150.

Walsh Jr let Lewis off the hook on zero, dropping a simple chance at point. But Santner kept things tight with the first maiden of Hero CPL 2020, Holder kept the pressure on, and that pressure told as Lynn carved Santner to Walsh Jr who held on this time. 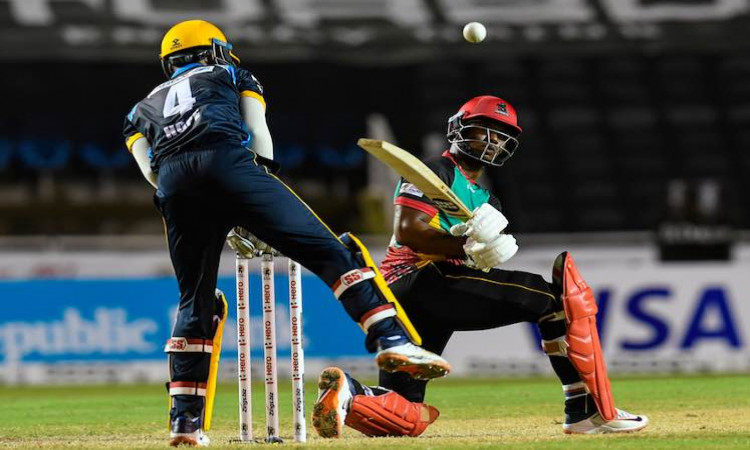 With Lewis struggling, the Patriots crawled to 33/1 off the Powerplay. Rashid’s first ball was loose and Lewis crashed it for four, but the Afghan showed yet another facet of his game to run out the dangerous Trinidadian. Joshua da Silva, promoted to three on T20 debut, crashed a drive into the bowlers’ wicket, and Rashid reacted first to knock out the remaining stumps and catch Lewis short.

Dunk powered Nurse and Walsh Jr for a boundary each to keep things moving, then sent Reifer to the fence and then over it for the Patriots’ first Hero Maximum, leaving the Patriots 81/2 at the Angostura LLB drinks breaks.

Da Silva picked up a few boundaries off Rashid but struggled to score above a run a ball. Then Santner returned in style - Dunk went for power but toe-ended to Mayers at long-on. Holder kept his bowlers going in one-over spells, never allowing Da Silva and new Patriots signing Denesh Ramdin to settle.

Nurse almost pulled off an unbelievable catch in Santner’s last over, but Rashid was not to be denied. Walsh Jr came up with a true Republic Bank Classic Catch at deep midwicket to send Ramdin packing and the googly next ball was too good for Jahmar Hamilton. He couldn’t pick up a second Hero CPL hat-trick, but the damage was done.

Da Silva kept swinging but found no timing or placement, and though Tanvir demonstrated his power with a pull for four off Reifer, even with a no-ball, a free-hit and a monster six onto the bank from Tanvir, Mayers had enough to defend off the last over. With only five wickets down, and from the start they made with the ball, the Patriots will be wondering how they let this one get away.

With Inputs from CPL 20 Press Release