Bangar's role under scanner even as India coaches enjoy extension 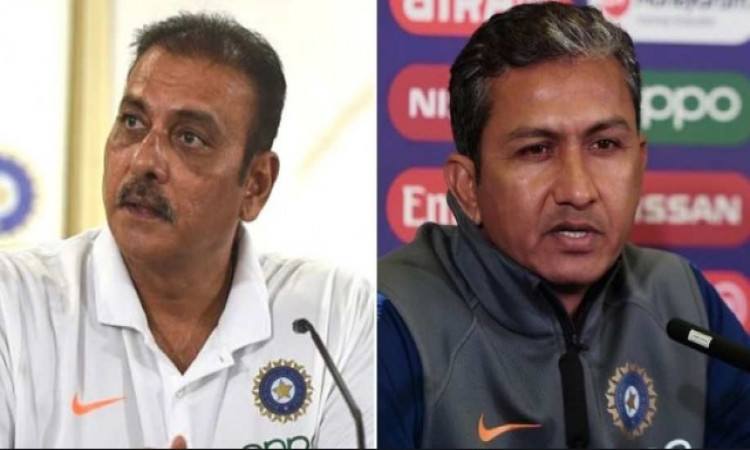 July 12 (CRICKETNMORE) The Indian coaching staff, including chief coach Ravi Shastri, might have been handed a 45-day extension after their contract ended with the 2019 World Cup. But the position of assistant coach Sanjay Bangar is under the scanner as certain sections within the Board of Control for Cricket in India (BCCI) believes that he should have done a better job. While he is tagged assistant coach, Bangar is the de facto batting coach.

The general belief is that the bowling unit under coach Bharat Arun did exceptionally well in the last year and a half while the team's fielding under R. Sridhar has also improved a lot. But the same cannot be said of the batting unit and the fact that India failed to find a fixed number four batsman for the showpiece event hasn't gone down well with the BCCI.

Also Read: Sunday is a day to look forward to and enjoy: Morgan

A senior BCCI official said that the constant chopping and changing in the middle-order was something that had hurt the Indian team not just in the World Cup, but over the last couple of seasons. And for Bangar to not be able to find a solution is something that reflects poorly on the coach. In fact, Bangar saying that all-rounder Vijay Shankar was fit just before he was ruled out has also been taken note of.

"It was a constant struggle," the official said. "While we are all supportive of the players and they had a good tournament with the exception of this bad day in office (in the semi-final against New Zealand), the support staff's processes and decision-making will surely be scrutinised thoroughly prior to any decision being taken about their future.

"Also, it was pretty ordinary stuff when you had Bangar stating to the Indian media contingent that every player was available for selection when Shankar was ruled out early next morning on account of an injury sustained earlier on tour. Things have been somewhat disorganised when it comes to the assessment of performances of the support staff being made by people who were keen on having select individuals continue in their positions.

"The present administration set up including the senior employees were all at sea with cricketing decisions and at the same time were ignoring the Cricket Advisory Committee (CAC) - comprising of Sachin Tendulkar, Sourav Ganguly and V.V.S. Laxman - completely and that's a shame," the official said.

In fact, sources in the know of developments within the team have also spoken in hushed tones about how some of the batsmen have had to seek the advice of former batting stars when they have hit a rut.

"Without taking names, it is well documented that a couple of current team members have spoken about how they approached some of the former India batsmen to help them erase flaws in their batting when they were having issues scoring runs," the source told IANS.

Interestingly, team manager Sunil Subramaniam's conduct during the showpiece event has also left some of the board officials stunned.

"Anyone who has interacted with the team manager has been left utterly disappointed with his conduct and approach. Obtaining tickets and passes for his friends seemed to be his primary concern and the positioning of his hat seemed to be the secondary one," the official said.

A source in the know of developments further added that the manager has had issues in the past as well and that his behaviour had put the board in trouble during the tour of Australia at the start of the season.

"During the Perth Test, there was an oral communication from the catering unit to Cricket Australia operations manager Adam Fraser about the manager making some staff uncomfortable with his behaviour.

"This isn't the end of the story. After the team's historic series win Down Under, there were certain orders made for celebration and the stuff that remained unused went with the manager for personal consumption."

While the Committee of Administrators (CoA) have given the support staff 45 more days to coach the Indian players, some of the members could be asked some serious questions when the next appointment is undertaken by the BCCI.