Ajinkya Rahane ran out his captain Virat Kohli after a horror mix-up, sparking a mini-collapse to gift Australia a big advantage over India after an intense opening day of the day-night first Test at the Adelaide Oval Thursday. 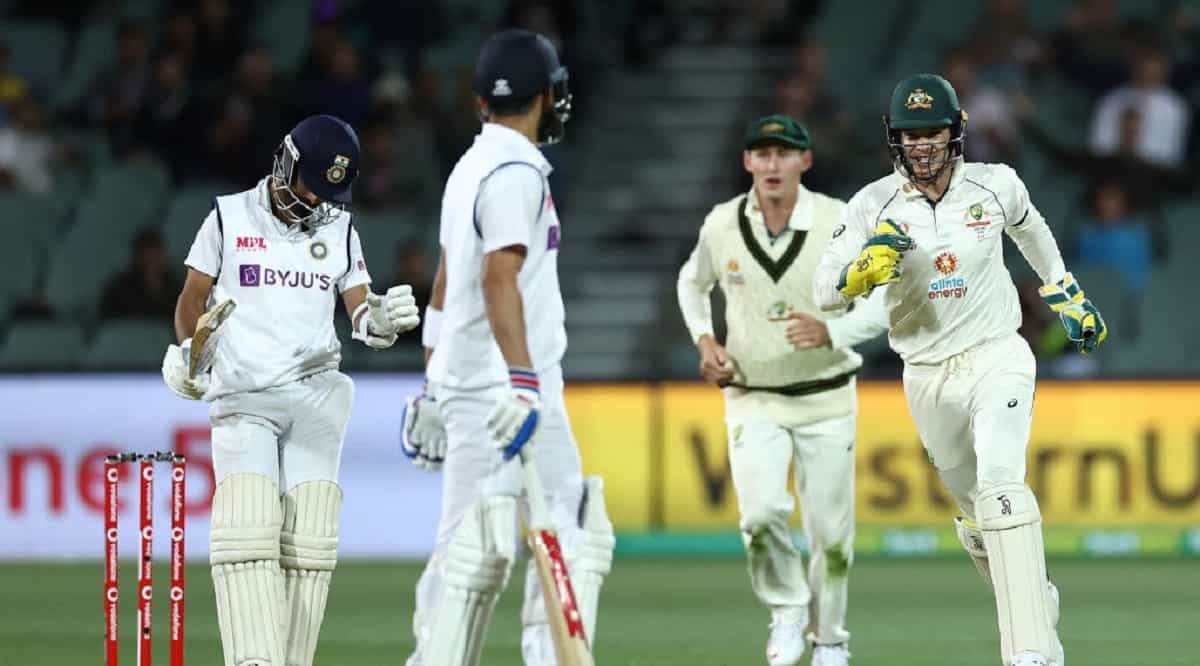 Ajinkya Rahane After The Dismissal Of Virat Kohli

Master batsman Kohli looked on track for a 28th Test century after knuckling down to steady the ship when he came in at 32 for two.

But in the final session of the day, Rahane pushed at a Nathan Lyon delivery and made to run, only to bail out, leaving Kohli stranded in the middle of the pitch after his battling 74.

It spoiled a fighting recovery from India who lost Prithvi Shaw to a fiery Mitchell Starc in the first over of the day and were struggling when Pat Cummins snared Mayank Agarwal.

To make matters worse, Rahane fell for 42 soon after, and then Hanuma Vihari went for 16, leaving the visitors on 233 for six at the close, and Australia in charge of the first Test either side has played since early in the year due to the coronavirus pandemic.

Wriddhiman Saha was not out nine and Ravi Ashwin unbeaten on 15.

Starc was the pick of the Australian bowlers with 2-49, with Josh Hazlewood, Cummins, and Lyon all getting one each.

A dogged Cheteshwar Pujara (43 from 160 balls) and Kohli had led the fightback.

Kohli, in his only Test before heading home for the birth of his first child, was fortunate to survive on five, nudging a short ball off bat-pad from Cummins' bowling, with Matthew Wade just failing to get his hands underneath the ball.

He also benefited from what appeared to be a blunder by Tim Paine opting not to review a catch behind, which replays showed may have come off his glove.

Undeterred, Kohli brought up a stubborn 23rd Test half-century with a single off Cummins in front of a coronavirus-limited crowd.

Twilight is supposed to be the toughest time to bat in a day-night Test with the ball zipping around more than normal, but Kohli looked untroubled until Rahane's meltdown.

Lyon earlier got a big breakthrough by removing Pujara, whose 123 and 71 set up India for a 31-run win in Adelaide in 2018 en route to a maiden series victory in Australia.

But it took a review, with replays showing he edged the ball onto his pad, popping it up to Marnus Labuschagne at leg gully.

It snapped what was shaping as a dangerous 68-run partnership with Kohli after India lost two wickets in a difficult first session when they were pinned down by Starc, Hazlewood, and Cummins.

Australia went into the clash with their usual three quicks, but also debutant all-rounder Cameron Green who sent down a handful of tidy overs, and they got off to a spectacular start.

Opener Shaw was clean-bowled for a duck by left-armer Starc, the world's most potent pink-ball bowler, on only the second delivery, chopping onto his stumps as he looked to drive.

It was a poor shot and will give Indian selectors plenty to ponder after preferring him to fellow 21-year-old Shubman Gill, who has been in good touch.

It was slow going as Pujara and Agarwal scored just 21 in the first 10 overs before Cummins broke the second-wicket partnership with a beautiful delivery that clattered into Agarwal's middle stump, removing him for 17.